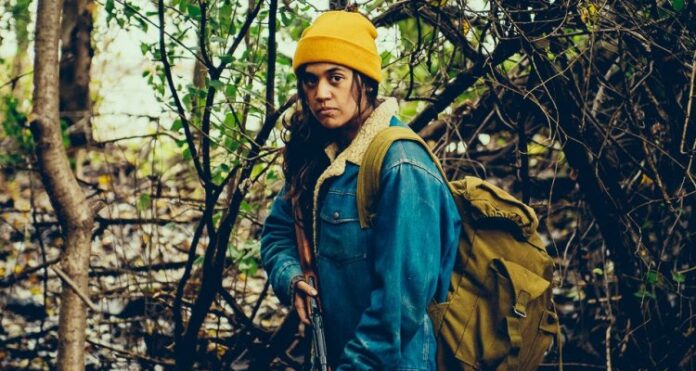 “Maybe what happened was bound to happen, like destiny”, narrates 15-year-old Margo (Kenadi DelaCerna) in Haroula Rose’s directorial debut, Once Upon a River. Her words suggest a clear destination, a journey from which the end is inevitable. Stories set by the long and winding river are perfect for such adventures, providing a backdrop of a fading way of life while the protagonist evolves into someone different, someone better, someone newer. While Rose’s film is soulful and visually arresting, there is too much left undiscovered about Margo for it to connect as well as it should.

Based on the acclaimed novel by Bonnie Jo Campbell, which became the basis for Rose’s 2016 song “Margo”, Once Upon a River shows the musician to be just as thrifty in her filmmaking as in her music. The story here is straight-forward and economical, leaning into the performance by DelCerna as the wide-eyed Margo. There’s something dark and foreboding in her earlier quote, and it’s easy to see where this attitude comes from. Set in 1977 in the river town of Murrayville, Michigan, Margo has been forced to grow up before her time. Her unhappy mother Luanne (Lindsay Pulsipher), who had stirred up some trouble around town, vanished to set up a life elsewhere, leaving Margo alone with her father Bernard (Tatanka Means). He has taught his daughter how to be resourceful just like her indigenous ancestors; she can shoot better than any man, inspired by her apparent hero Annie Oakley, and hunt just as well. But Margo is also beautiful and young, earning the ire of her cousins but the lecherous eye of her uncle Cal (Coburn Goss), who takes advantage of her loneliness and naivete.

Margo finds herself caught in a sudden whirlwind of tragedy. A sexual encounter leads to an accusation, which leads to a deadly confrontation where two people are shot, one fatally. With prejudice in the air, Margo does the only thing she can do and flees to find her wayward mother. The men Margo forms relationships with is what Once Upon a River is all about, and that’s a problem because we don’t know how they change her in any way. Each man seems willing to help her, whether it’s through a ride or food or just a roof to hang over her head. Some appear to want something in return, like the family friend who jokes about Margo being his “dream girl” because she “doesn’t talk”. There’s another, Will, a Cherokee who speaks openly about his heritage and the hardships they face from a nation that “never intended for us to survive.” What impact this has on Margo is unclear; she remains frustratingly close-mouthed throughout, an interesting choice given the film is bookended by thoughtful narration.

We don’t know how Margo’s destructive incident with the white half of her family informs her in the final act, as she cares for emphysema-victim Smoke (John Ashton) at his home on the river banks. Is the life of cleaning up after people what she’s destined to, as one character suggests earlier in the film? Being a caretake isn’t a bad thing, we just don’t know  how Margo feels about it, or much of anything. When she finally does get around to meeting her mother, it doesn’t amount to much considering this is everything the movie has been building towards. This isn’t a fault of the actresses, either. Both are very good here, with DelaCerna’s combination of hesitation and earnestness coming through as understandable. The writing lets both women down, however, and a sudden change-of-heart by Margo is too cloudy to be satisfying.

There’s a restorative beauty in the cinematography by Charlotte Hornsby, framing the glistening river in an ever-present autumnal palette. It is a place of tranquility and freedom, ironic given the chaos and violence that Margo’s life has been engulfed in. These calming visuals, along with an eye-opening lead performance by DelaCerna, help to pull Once Upon a River from being as dire a coming-of-age story as it might’ve been. But without a greater depth of character and purpose, this river journey stays tied to the docks.