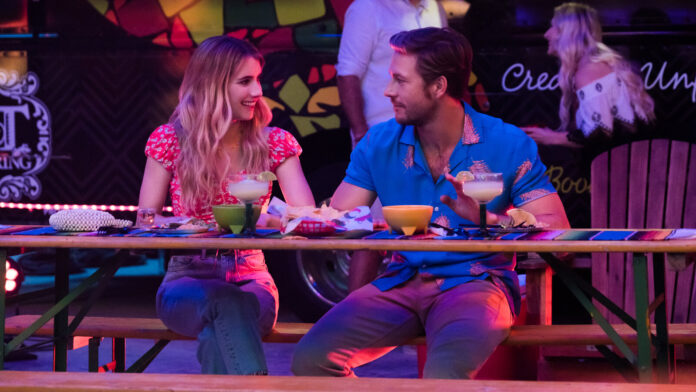 It’s almost Halloween which means that the Christmas craze has begun. Whether you’re out and about and you see trees and decorations or sitting at home when you see a Christmas commercial, it’s hard to escape the holiday season. Well, Netflix has officially kicked off the Christmas movie season with Holidate, a romantic comedy starring Emma Roberts and Luke Bracey. Following two strangers, fed up with the familiar and societal expectation that they should bring a partner to holiday gatherings, decided to make a pact being each other’s date for all holidays – a holidate.

Roberts plays Sloane, a young single woman approaching 30 but you would think she would be dying by the way her family rails her about being single and alone. After a sad and disastrous Christmas, she meets Jackson (Luke Bracey, Little Fires Everywhere) in line returning gifts. They bond before Sloane proposes they be each other’s date for every holiday in the foreseeable future. Over the next year, the two become closer and closer until they can’t deny their feelings any longer.

Holidate is easily one of the crassest holiday films I’ve seen, which wouldn’t have been awful if it was done in a realistic way. Shock value and cussing does not always equal comedy and instead of taking the time to expand character development or find laughs situationally, there are a few times the script borderlines on the grotesque.

Though the film starts and ends with Christmas, the majority of it looks at other holidays. I’m sorry but since when did someone need a date for Cinco de Mayo or St. Patrick’s Day? A movie about bypassing loneliness and settling for the holidays is nothing new, Hallmark makes a fortune on their Christmas film collection. However, Holidate packs in the clichés and tries to cash in on modern-day millennial and zennial cynicism about love. Want to say something new about love that millennials and zennials can relate to? Make a Netflix rom-com that’s representative of LGBTQ couples or polyamorous ones or at least one that is somewhat rooted in reality.

You can watch Holidate on Netflix. Watch the trailer below.