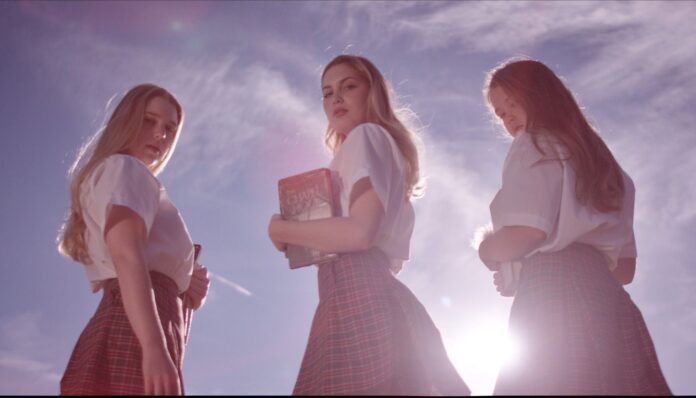 Fishbowl follows the Simon family, who had everything going for them. Rick (Rick Kain) and his wife Macy (Judith Hoag) have three beautiful daughters they were crazy about. They lived in the small town of Bishop County where no secret was safe. When Macy passes away, the whole town knows and judges the rest of the family. This pressure from their community and angst from the loss of the girl’s mother has a profound effect on the entire family.

Belle (Belle Shickle) the oldest daughter copes by acting out. She begins cheating on her tests, avoiding responsibilities, and spending time with shady people. Much to her father’s dismay, Belle begins dating Joey (Alex Swenson), who is clearly a bad influence. Rachel (Emily Peachey), the middle daughter, is trying to keep her life together. Unfortunately, her closest friend’s parents forbid them to spend time with her – leaving her alone and vulnerable. Jessa (Caroline Coleman), the youngest of the group, has gone mute. She carries around a notebook with her, writing any answer she needs. The kids at school tease her constantly, but she doesn’t waiver.

Then there is Rick. Rick tries to keep it together for the family. That only lasts so long as he falls into a deep despair. Rick starts to obsess over rumors of the coming rapture. Rick lets other parts of his life slip as he desperately tries to save the souls of his family. The rapture infiltrates his thoughts and dreams and Rick begins to scare the girls. In his mind, none of that matters as long as he does right by his family when the rapture comes. The only question is how far will he be willing to go? 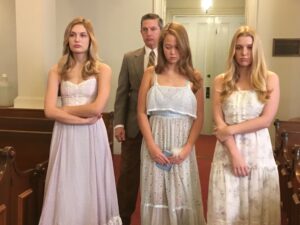 For those of you with DMV pride, you’ll be excited to hear that Fishbowl is filled with local ties. The directors – Stephen and Alexa Kinigopoulos are Baltimore raised and the executive producer George Pelecanos is a DC native. Granted none of this translates to anything meaningful in the film, but it is always nice to support local talent. Rick’s deterioration is a pivotal aspect to Fishbowl and the Kinigopoulos siblings hold nothing back. He has nightmares filled with great imagery that really stood out. As he descends further, the dreams intensify leading to some really powerful moments.

The Kinigopoulos’ excel at framing shots, getting the most out of them and drawing the viewer’s focus. In addition to the framing, the color choices – mostly muted and pale yellows and bright whites – stand out and dictate the energy of the scenes. They use flashbacks as well as cutscenes to help pace the film. Kain is especially fantastic throughout and he carries the movie. His facial expressions and brooding looks speak wonders. As Rick spirals, the intensity builds. There is a sense of dread boiling as an ominous feeling hangs over the entire film. Fishbowl does not reinvent the genre, but it has a handful of scenes that stick with you long after the credits roll. Fishbowl does just enough to make it worth a watch.