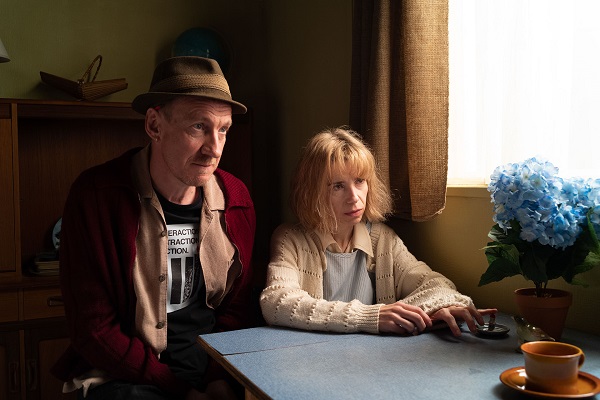 Films portraying mental illness (especially when depicted by someone considered “normal”) is always a slippery slope. Ben Stiller’s Tropic Thunder captivated in the most non-PC way that actors should “never go full” when trying to portray differently abled characters. For one, now our society is “woker” than it’s ever been and there’s always a crowd for wanting authenticity, but not being insultingly exaggerated, and secondly, there are differently-abled actors who should get to play the part themselves. This means, portraying people honestly and accurately requires everyone to be on top of their craft. From the director on down to the actors. Lucky for us, Eternal Beauty manages to thread the needle rather well.

Jane (Sally Hawkins) is a paranoid schizophrenic who not only has to manage her mental illness but also deals with a rather dysfunctional family who in addition to dealing with her, have their own problems. Her younger sister Nicola (Billie Piper) is self-obsessive as well as self-destructive and asks for pointers on how to pretend to be a paranoid schizophrenic so that she can scam the government. Her other sister Alice (Alice Lowe) seemingly has a perfect life, but Jane seems to think that her brother-in-law Tony (Paul Hilton) is cheating on Alice. Her mother Vivian (Penelope Wilton) seemingly doesn’t want anything to do with her, while her father just sits and smiles at everything her mother does.

Family aside, Jane’s life is rather interesting and gets even more interesting when she meets Mike (David Thewlis) and the medical facilities. Mike’s a kindred spirit as he also suffers from some mental illness. Mike never tells what it is, but his difference from everyone else becomes attracted to her, and for the first time in her life, she’s found someone to have an emotional connection with. This causes a little bit of a wedge with her and her family. Jane’s mother doesn’t like the fact that her daughter is with an unemployed and mentally ill person. He doesn’t give the other family members a good vibe either. Through Jane’s relationship with Mike, Eternal Beauty gets to navigate not only the closeness of a newly blossomed relationship of like-minded people, but it also explores the notion that the care-free attitude of both of them might not be healthy as it enables both of them to distance themselves from their loved ones even further.

Right off the top, the performances of this film are top-notch. Sally Hawkins completely delivers as Jane as she deals with her mental illness. Through her performance, if gives the audience a front-row seat as to what the daily challenges (and fun surprises) exist for someone going through this type of mental illness. There is a heart-wrenching scene where after a breakdown she is put into a facility for treatment and it completely feels like a prison. Through the beginning of the film, she’s a pariah even by her own family, but by the end of the film, completely comfortable with not being “boring.” David Thewlis also does a great job as Mike. His care-free attitude shines as is welcoming for Jane. Penelope Wilton comes across as a cold mother in her alienation of Jane, but does it in the most deliciously passive-aggressive way possible.

As good as the acting is, the directing is what is the best visual storyteller for Eternal Beauty. Actor-turned-Writer/director Craig Roberts and cinematographer Kit Fraser perfectly capture what it possibly feels like through the cinematic atmosphere. You as the audience, get to have the feeling of Jane’s mental illness and things jump from one scene to the next. The utter confusion of how any given scene plays out allows you to have the same feeling that Jane is having during the events of Eternal Beauty. Unfortunately, that also can be incredibly distracting and make what’s going on feels nonsensical. There are a few moments that revert from the present day to childhood without warning and having a narrative grasp of what’s going on can be really trying for the audience.

Eternal Beauty also bills itself as a dramedy, yet there really weren’t many laughs. Perhaps it’s because it’s from across the pond and may not be comedically relevant to us Yankees, but none of the jokes really worked and the film should have stuck to telling a straight dramatic story, which is when it’s at its best. Overall, Eternal Beauty shines based on its outstanding performances and unique characters. It also works well because the film doesn’t try to use Jane’s disability to be inspirational or make you feel sorry for her. It manages to walk the line to just let you see and understand her as a person.