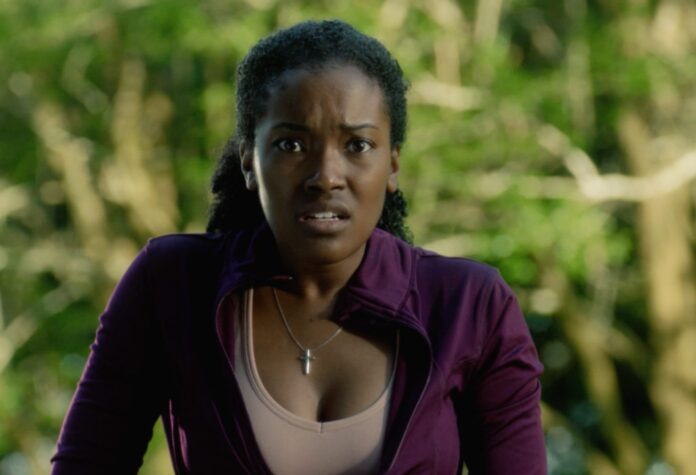 It’s October and you know what that means! It’s that time of the year for horror movies to be front and center. The latest one being Don’t Look Back. The film follows Caitlin Kramer (Kourtney Bell) a young woman who has gone through a lot of trauma. Caitlin is trying to live a normal life, even though she suffers from anxieties and hallucinations. Slowly but surely, with her boyfriend Josh’s (Skyler Hart) support and a lot of therapy, Caitlin is making progress. Well what kind of horror movie would it be if everything was just fine and dandy?

Caitlin is running through the park one afternoon when she sees a man brutally beaten to death. She freezes in fear and doesn’t do anything to help him. She’s not the only one though. There is a group of people standing around watching, and one filming, but no one helping. Turns out the deceased man, Douglas Helton (Dean J. West) is a well-known philanthropist and overall great guy. The city is in outrage and Douglas’s brother Lucas (Will Stout) is fanning the flames. Lucas wants the onlookers of Douglas’s murder held accountable.

Detective Boyd (Jeremy Holm) takes the statements of all the witnesses and tells them to keep a low profile. The witnesses include Curt (Damon Lipari), Tony (Han Soto), Althea (Jaqueline Fleming), Maria (Amanda Grace Benitez), and Nathan (Stephen Twardokus). Shortly after, Caitlin coincidentally ends up being at the scene of, what the police rule, Nathan’s suicide. Caitlin isn’t convinced and swears she saw someone in the window of Nathan’s apartment. Between her anxiety and propensity for hallucinations, she’s having trouble getting anyone to believe her. That is until the next witness ends up dead too…

Writer/director Jeffrey Riddick, who was the brains behind the Final Destination franchise, is at the helm of Don’t Look Back. Final Destination was a wild success, spawning multiple sequels and carving out a permanent place in the horror world. Unfortunately, Don’t Look Back, Riddick’s first feature length directorial debut, has nowhere near that staying power. The premise is decent enough, but Riddick takes the film in too many directions and it becomes a jumbled mess. Sometimes simpler is better with horror films and Don’t Look Back strays from the notion.

Riddick does include some interesting social commentary about the world we live in today. A world that finds people stopping and filming incidents to try and get a small moment of fame, instead of doing the right thing and helping a person. Morality is a common theme in horror films, and that’s no different here, just with an added modern twist. No horror movie would be complete without tense music/tones and slow panning camera work. Riddick makes sure we get our fill of both. As Caitlin is spiraling, the music intensifies, and we see more disjointed camera work and editing – mirroring the instability she is feeling.

Luckily for the audience, we do get a brief montage (who doesn’t love a montage) and a Rainn Wilson cameo! Wilson plays George Reed, a news anchor who is constantly on in the background calling for justice. Montage and Wilson cameo aside… there just isn’t enough in Don’t Look Back to separate it or really make it worth a watch. The acting is all over the place, some truly terrible performances and some decent ones, but nothing great. Most importantly though, Don’t Look Back is lacking in scares. There are a few jump scares, but a truly terrifying atmosphere is never established. The film trudges along, getting lost in the weeds, and never satisfies. With all the great horror content out there, Don’t Look Back is one you can skip and still sleep easy.