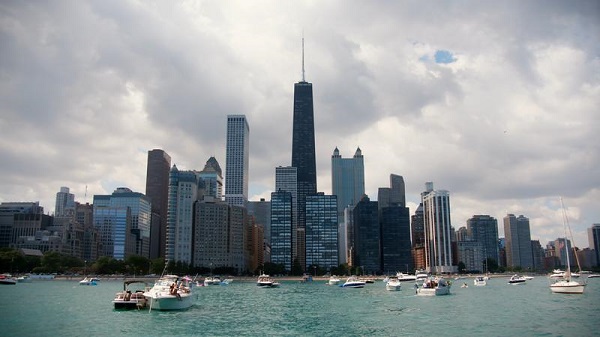 If you spend any time watching the news, social media, or listen to the current president, you would consider the city of Chicago a failed city. Known mostly through the headlines as “Chi-Raq,” Chicago has been often compared to a war zone of lawlessness, systematic corruption, and just an overall unpleasant place to live or visit. Of course, sensationalized headlines and conservative propaganda don’t paint a clear picture of the third most populated city in America. A city that has vibrant communities, as well as its share of problems. Director Steve James (Hoop Dreams, America to Me) showcases the city full of so much passion in National Geographic’s latest documentary City So Real.

While it does not overlook the fact that Chicago has a gun, murder, and gang problem, there’s so much more to it than what the headlines often display. After a brief voiceover of media reports of gangs, it shows another side of Chicago, a city that’s having a “revitalization” problem. Small business is taking a hit as rich developers and corporations are coming in and pushing the little guy out of the way. Small mom and pop diners and bars are feeling the pain of Mayor Rahm Emmanuel’s new big development deal, which is leading him to be the most hated person in Chicago. To top that off, Chicago is having a major crisis with police accountability as a young man named Laquan McDonald was shot 14 times in 2014.

City So Real has a very dynamic outlook on Chicago as it takes a three-pronged approach to observing Chicago. The first part of the story not only introduces us to the city and its many different citizens, but it also shows that the city is failing its citizens, mainly its black citizens. Laquan McDonald’s death (and Ram Emmanuel and the police department’s attempt to cover up the police dashcam footage from the public) has caused a lack of faith in the many institutions within the city. The police officer who killed MacDonald, Jason Van Dyke was on trial for the murder and tensions are high in the city. Will yet another senseless murder of a young black man have no consequences and show once again that in the eyes of the police that black lives “don’t matter?” Or will McDonald’s family get some sense of justice for this? Of course, the tensions are felt everywhere as City So Real displays a tale of two cities and many of the white citizens feel the shooting was justified while black citizens are once again screaming for accountability. Steve James does a great job displaying the divide while showcasing the conversations that are going on at a black barbershop and then contrasting to the conversations at a white barbershop as the patrons of those establishments are having dynamically two different opinions about the case. There is a little causal racism thrown when the white patrons are in their own safe spaces, and heated arguments among black people trying to get a haircut. The trial is tough and is somewhat tearing the city apart, but eventually, justice is served with a guilty verdict, even though Van Dyke gets only 6 years for shooting someone 16 times. In the aftermath of the trial (and the genuine fact that everyone hates Emmanuel), the mayor decides not to seek reelection.

This election is a SLUGFEST!!! Director Steve James is given unfiltered access to each of the candidates as they tirelessly work to win the election. This show’s the process of how Chicago politics work, and it’s not a pretty process. A great deal of time is spent on the signature validation process. Each candidate has to submit signatures from constituents in support of their candidacy and present it to the election board. This is where dirty politics comes into play. One candidate can “challenge” the validity of the signatures, which gets lawyers, review boards, and election individuals involved, and it’s usually just to drain who they perceive as their biggest competition’s money and resources to fight the challenge. It drains man-hours on city employees (who had to do massive overtime and work incredibly late on Christmas eve) literally researching thousands of citizens’ voter registrations and signatures (as if people always write the same signatures every time they sign). It showcased a fundamental flaw in the city’s voter laws and kind of set the tone for how mail-in ballots might get politically scrutinized next week in the presidential election. Tensions run high as campaign staffers almost come to physical fights over unnecessary challenges trying to cheaply tick away at their opponents. Of course, there’s dirty campaigning. Amara Enyia was labeled a tax cheat, Garry McCarthy caught flack for LaQuan McDonald, Willie Wilson was called a shady businessman, Toni Preckwinkle’s former Chief of Staff had a sexual harassment charge that she supposedly looked the other way on, Lori Lightfoot was openly gay and caught homophobic comments, and countless other examples of mudslinging went throughout the campaign.

But the campaign wasn’t all bad. It showed how each candidate approaches selling their vision to the citizens of Chicago. It was a little interesting watching City So Real already knowing that Lori Lightfoot was going to win it and become mayor, as one can find themselves starting to be attracted to another candidate who will eventually lose. In addition to showcasing each candidate’s style of campaigning, Steve James gives you a tour through the many different communities throughout Chicago. In addition to black and white communities, there is a significant population of Latinos in Chicago, who worry about immigration as they are feeling the pain of living in “Trump’s America.” Another connecting theme that has hurt these communities was the subject of gentrification, which a fair amount of time is spent on understanding how that can literally destroy what a city once was in the pursuit of more money. As described by many of its citizens, the city loses a bit of its soul when it goes through gentrification.

The third part of the documentary is all in the last episode in which the pandemic that we are all still going through hits Chicago. It’s almost dumb luck that Steve James had his camera because the rest of City So Real focuses on a mayor with nothing but terrible and difficult choices to deal with as the world seems to be coming apart. Lightfoot was a very public major with the media in regards to dealing with Coronavirus, so she gave the same access for the documentary. The families and people showcased in earlier footage of the documentary are now dealing with mortgage payment issues, job loss, and friend and family loss. A city that was already teetering on the edge now has an unforeseen thing to further complicate everything. Lightfoot acknowledges that she loves the memes that we all made of her being a strict no social distancing mayor and her frustrations with the Trump administration and their dealing (or lack thereof) with the pandemic on a federal level. She had to try and hold the city together as best she could… and then George Floyd happened.

A city that already had to deal with a lack of police accountability, Laquan McDonald, is now in the midst of a national conversation on race and police brutality. In this part, the camera focuses on Lightfoot as she tries to address her citizen’s concerns, deal with police officers who are a little overzealous during the protests, and deal with people who are promoting anarchy and violence during these protests. It sucks to be the mayor when everyone knows where you live. Many citizens came to Lightfoot’s home to protest and while she sympathizes with everything going on, that was in her opinion a line too far as she did not want her wife or daughter caught in the crosshairs. There also is a great deal of citizen activism that transpires as a result of the George Floyd awakening as a city that often is thought of as having a white side and a black side suddenly find them together marching in the streets. Of course, there are some detractors: a Mexican gang and groups of white vigilantes that would randomly assault black marchers in the name of “keeping order” as well as Italians who took issue with vandalism of the Columbus statue. The issue of peaceful protests as well as “rioting” was addressed by many of the same interviewing subjects as well as the notion of “defunding” the police were also tackled. The drama has seemed to calm down in Chicago, but just like everywhere else in the country, people are still fighting for the right of black and brown people not to be executed by the state.

City So Real is a deeply intimate look at Chicago, warts and all, and masterfully showcases the nature of politics, race, class, and how we as a society view these subjects desperately needs to change. It’s very reminiscent of Brick City which showcased Senator Corey Booker’s rise to fame as mayor of Newark, but City So Real really rolled up its sleeves and gave an honest and gutsy look at an American city, one full of problems, but also full of life, hope and dreams.

City So Real premieres on National Geographic Channel today and will be available on Hulu Friday, October 30th.