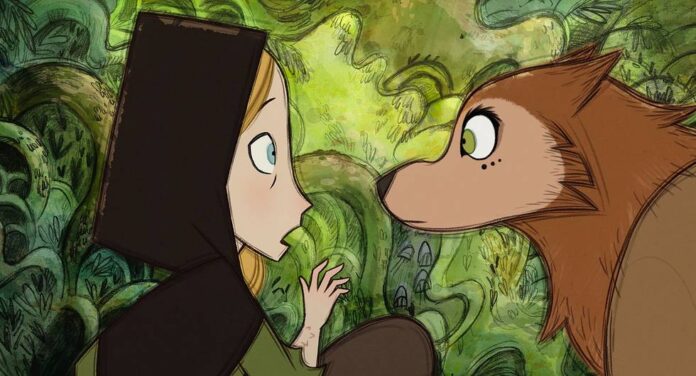 Though Disney and Pixar gets a lot of glory and credit when it comes to animation, small Irish studio Cartoon Saloon has been releasing hidden gems for over 10 years. Their first two films Secret of the Kells and Song of the Sea were both nominated for Oscars and were based on Celtic and British lore. This time the studio is back with the new animated tale, Wolfwalkers, proving that their formula for good storytelling, not only still works but can still evolve and change the medium.

Taking place in medieval Britain, curious Robyn just wants to hunt with her father. Outside their village lives a vicious pack of wolves, threatening to destroy their community and resources. Town legend says that they are magical beings, humans that can turn into wolves and control the pack. After following her father into the woods, Robyn runs into such a creature, Mebh, a “wolfwalker.”Connected together by their matching curiosities and spirits, Robyn and Mebh must put their differences aside and work together to save Mebh’s mother who has mysteriously disappeared.

Like Secret of the Kells and Song of the Sea, each frame is beautifully and tastefully drawn and animated. Whimsical and clever, but never overwhelming, the forest and fortress that these girls live in feel like real places. Drawing upon medieval stain glass and tapestry, Wolfwalkers proves that there still is innovation left in 2D animation.

Though Wolfwalkers has a happier ending than Tomm Moore’s previous film Song of the Sea, getting there is emotionally brutal. Playing these young kindred spirits are Honor Kneafsey and Eva Whittaker. It’s hard to get such a raw performance from a singular adult actor in a live action film. To get two from such young vocal performers is truly a testament to not only their talent but Moore and Stewart’s direction in the booth.

In a way, it’s like a kid version of Game of Thrones. There seem to be ample examples between the two that even the casual GOT fan would pick up, including an honor driven father played by Sean Bean. This doesn’t take away from the film’s charm, if anything it adds to it. The playful yet flippant relationship between Robyn and Mebh feels refreshingly natural and yet complex for a children’s film. Coming from a smaller animation studio like Cartoon Saloon, allows the film to give not dumb down the material in a way that more popular studios might.

At a time where we seem to be questioning our consumption and the ethics of the companies that receive our patronage, it’s freeing watch something that doesn’t feel weighed down by corporate America. It could be too early to say since Soul isn’t out yet, but Wolfwalkers might finally grant Cartoon Saloon their well overdue first Oscar statue. Only time will tell, but watching the free-spirited and earnest film feels enough like a reward.

You can catch Wolfwalkers on December 11 on Apple TV+ and selected theaters. Watch the trailer below.

‘Wolfwalkers’ Trailer: Cartoon Saloon Is Back With Another Likely Oscar Contender