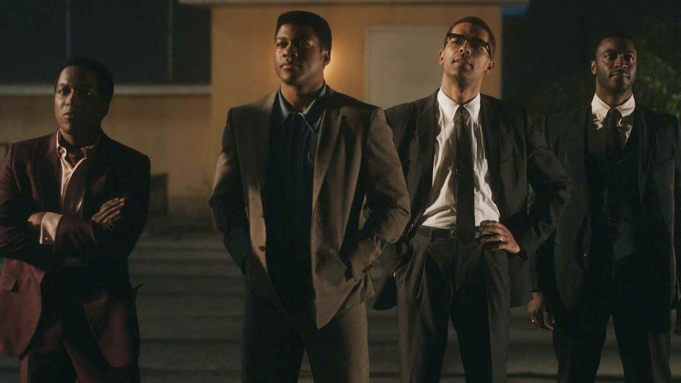 Not everyone could make a movie like One Night in Miami, at least not in the way it needs to be done. Regina King, one of the today’s best actresses who can seemingly do nothing wrong, chooses about as challenging a film as possible for her directorial debut and proves that she may actually be better behind the camera than in front of it. A fictional story that imagines a dream-meeting between Cassius Clay, Malcolm X, Sam Cooke, and Jim Brown on a warm Miami night in 1964, it looks at the weight black celebrities carry with them during times of struggle. Do they use the power of their fame to champion causes bigger than themselves? Should they? Must they?

A celebrity herself, King has undoubtedly grappled with these questions, especially right now when black people are dying in the streets every day and a government that stokes racial violence as a political strategy. One Night in Miami grapples with this issue and while it is heavy with a meaningful conversation on the subject, it is also a vibrant, fast-paced fairy tale that does justice to all of these monumental figures in entertainment and civil rights.

We’re introduced to the four central characters while each is at a low point. Cassius Clay (Eli Goree) getting floored by Henry Cooper after too much showboating in the ring; Jim Brown (Aldis Hodge), the record-breaking Cleveland Browns running who stops to meet a well-connected, adoring and ultimately racist fan (Beau Bridges); Sam Cooke (Leslie Odom Jr.) after bombing badly at the all-white Copacabana club; and Malcolm X (Kingsley Ben-Adir) as he contemplates leaving the Nation of Islam.

While all four men cast gigantic shadows, it’s Malcolm X who is really the driver of this story. On the night that Cassius Clay has defeated Sonny Liston to become World Champion, he asks them all to a cheap motel under the false pretense of a party. Unfortunately for the hard-partying dudes, Malcolm wants to use this time to talk about the black struggle and to push his friends into using their various strengths in the fight.

The film is adapted by Kemp Powers based on his own stageplay, and what’s wild about One Night in Miami is that it never feels stagey or restricted. King employs the use of space to tremendous effect; each man filling up the room with their presence but also constantly moving as if jockeying for position in a power struggle, which is basically what this encounter is. Each man is at a crossroads in their career, and while Malcolm X is a strategic sort he can’t account for things he doesn’t know, and that leads to moments that are celebratory and extremely heated. Brown has just completed his first acting role in the horrible western, Rio Conchos, and is contemplating an exit from football to pursue acting. Clay is on the verge of announcing his conversion to Islam, an act that will make him a target and cost his boxing career for a time. But the most contentious debates are between Malcolm and Cooke, with the latter seen as a sellout for making flowery, inoffensive music to appease the whites when musicians like Bob Dylan are out there taking risks. Cooke replies, effectively, that he’s using his business to empower other black musicians to be their own masters. Their volcanic exchange is tinged with a bit of sadness, as well, due to the tragic end both would meet soon after.

Each man gets his say, and there are no winners or losers in any of these discussions. Although personally, I would say Brown comes off the best here, with his fearless “fuck you” attitude about everything, he also comes across as the most intimidating. What’s fascinating is how perfectly relevant these discussions are for right now, as activism and fame are intertwined like never before and given more power thanks to social media. One Night in Miami almost feels like a prelude to the times we are living in today.

While the latter stages of the film are intense, they are matched by the spirited fun of the first act. These are, all of them, the best in their chosen field and they respect one another as friends and as giants. So you get Clay, who is only 22 years old, boasting loudly about how “pretty” he is and strutting in front of every mirror, only to be challenged to a mock fight with Brown, who then ribs Cooke for his taste in women. All of this while Malcolm, who is there for business, tries to corral these men, these FRIENDS, so they can get serious. Despite everything that goes on in One Night in Miami, these four come across as genuine friends the entire time, even when they are about to punch each other in the face.

The performances are extraordinary from everybody involved, with nobody attempting to do a cheap impersonation. Hodge and Odom can be expected to deliver greatness every time, but people may be less familiar with Goree and Ben-Adir. It’s not an easy task to match Clay’s charisma but Goree fills the room, while also revealing the trepidation of a young man on the verge of a monumental decision. Capturing the austere, serious, fearful, and nerdy side of Malcolm X, Ben-Adir is due for a big breakout once audiences are able to see his performance for themselves.

While being stuck in a tiny apartment for much of the film (there are a couple of minor excursions) can be exhausting, One Night in Miami lifts you back up again with the energy of its actors and the pivotal moment in time they are capturing. More so than just a meeting of really famous people, this is when our perception of what it means to be famous changes. King never loses sight of that, while also reminding us why these four black men, all champions in their own ways, were exactly what the world needed then. And maybe One Night in Miami is the movie that’s needed right now.