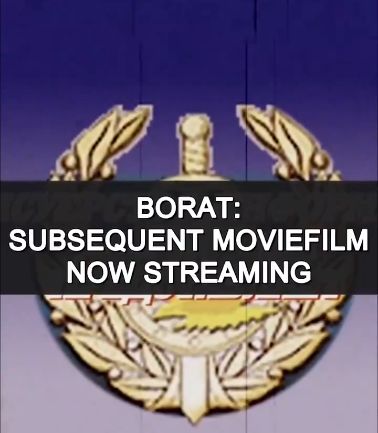 Borat Subsequent Moviefilm is officially out so the big scene which had been spoken about in hushed tones prior to release is out there in the world, and apparently Borat didn’t expect the reaction it got. During a segment in which Borat’s daughter Tutar (breakout star Maria Bakalova) interviews former NYC Mayor Rudy Giuliani things got a little weird as Giuliani seemed a bit flirty and then seemed to put his hands down his pants. His official word is that he was tucking in his shirt and nothing unsavory was going on but…well, it doesn’t look good. Thankfully Borat Sagdiyev is not one to leave his friends hanging. Released via the official Borat Twitter account, Borat makes it clear that what we saw on screen was simply “sexy time between a consenting adult and his 15-year old daughter”, obviously no big deal.

As a little bonus they’ve relased some unused footage of a trip to the White House where Tutar asks a very innocent (and very interesting) question, Why is it all of the fake news supports the left? Check it out below and check out Borat Subsequent Moviefilm on demand through Amazon Prime right now!

Trump very careful who he let into his events and house. No Covid test necessary – High 5! pic.twitter.com/Kf5gGk3n2M