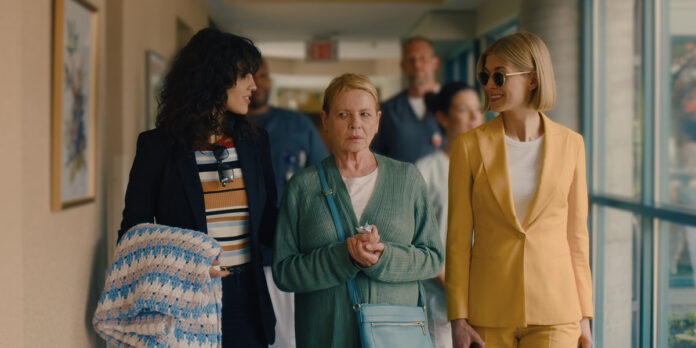 You always hear about people “abusing the system.” Learning the ins & outs, the ways to make it work for them. In I Care A Lot, Marla Grayson (Rosamund Pike) has taken that mindset and turned it into a career. Marla is a well-respected professional guardian. She has connections all over town to help her do her bidding. From doctors that are willing to bend the rules on their diagnosis to assisted living facility directors who she pays to hold rooms for her wards, Marla has everything running like a well-oiled machine.

Marla has her own operation with her lover Fran (Eiza Gonzalez) and they know all the tricks. They get their perfect wards, have the space reserved, and Marla works her magic. Convincing Judge Lomax (Isiah Whitlock Jr.) is easy, and before long she is their legal guardian. Marla becoming their guardian means she has access to, and controls, everything. Banks accounts, all their assets, safety deposit boxes – the works. Of course, Marla would never take advantage of that situation and she has her ward’s best interests at heart…right?

Marla can barely contain her excitement when she gets wind of a ‘cherry’ from her partner Dr. Amos (Alicia Witt). A cherry is Marla’s industry term for the perfect get rich client and Jennifer Peterson (Dianne Wiest) fits the bill. Jennifer is sitting on a lot of money and has no family to care for her. Marla immediately has her assisted living director Sam Rice (Damian Young) get the corner deluxe suite ready. Marla and Fran begin celebrating this goldmine that fell in their laps. What they don’t know is that Jennifer does have people that care for her. Very dangerous people. People like Roman Lunyov (Peter Dinklage) that will stop at nothing to find her and get her home.

I was incredibly impressed with writer/director J. Blakeson. Not only was the script for I Care A Lot fantastic, but his directorial choices were excellent as well. Blakeson managed to take a bunch of terrible people doing awful things and make the audience care what happened to them. Granted there are times when you’re not necessarily “rooting” for the best outcomes, but you are invested. He is able to keep you entertained and wanting more without a true protagonist. Blakeson weaves an intricate and interesting tale that is exciting throughout.

From the jump Blakeson is removing the fourth wall, having Marla speak directly to the audience. The humorous, yet captivating writing is evident right away and stays strong for the whole film. Blakeson dives into what is wrong with the system. Ways that people can not only exploit it, but also how they operate behind the scenes. I Care A Lot deals with guardianships and geriatrics, but the ideals and actions shown can easily be applied to a multitude of other areas. This thought is both fascinating and terrifying.

Blakeson behind the camera is equally superb. He employs numerous camera angels and effects successfully. From multiple zooming methods to having music essentially drown out scenes – Blakeson captures the whirlwind Marla puts her wards through. Blakeson gives us montages and rhythmic, almost hypnotic, scenes. Not only is the script top notch, but Blakeson finding success in the absence of dialogue is equally impressive. Sure, there are a couple farfetched moments during the film. However, they are few and far between and somehow still seem to work. The strong acting across the board only helps reinforce how good I Care A Lot was. Yes, you feel dirty watching it and it can make your skin crawl, but those reactions just emphasize how powerful parts of the film are. I Care A Lot is a thrilling and thought-provoking film and one that will stick in your mind for quite some time.

‘Bloodshot’ Trailer: Vin Diesel Gets Shot In The Face, Keeps On Comin’