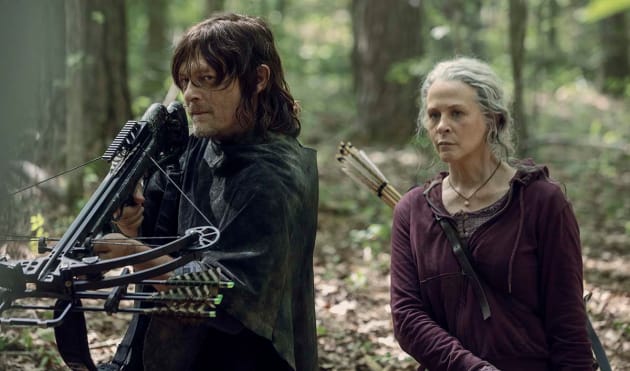 The analogy has been made ad nauseum, but The Walking Dead is a lot like the zombies that have stalked the franchise for a decade. You chop of a limb, and yet it keeps on coming. The decision has FINALLY been made to end The Walking Dead after its eleventh season, which will be jumbo-sized to pack in as much story as possible.  But the final season won’t be the end, just a temporary detour until another soon-to-be fan-favorite show arrives.

Just relax, fans. I know, you’ve been writing fan-fic about these two hooking up for ten years and now it may finally be coming true. But let’s just wait and see how this goes, okay? Deep breaths.

So let’s start with the core series, which is in the middle of its 10th season, delayed because of the coronavirus. Each season is split into two parts, and there’s still a mid-season finale coming on October 4th. That will be followed by 10 more episodes next year. All this to conclude that season 11 will probably start sometime in 2021 and stretch pretty deep into 2022 for a total of 24 episodes. So it’s not going anywhere anytime soon.

As for the Daryl and Carol Show (It rhymes and it’s perfect), it will be spearheaded by The Walking Dead showrunner Angela Kang and franchise creative lead Scott M. Gimple, to be ready for air in 2023.

Put all of this together and the Deadverse is bigger now than ever before. There’s still a sixth season of spinoff Fear the Walking Dead coming up, along with the October debut of new series World Apart. There’s also the anthology series Tales of The Walking Dead, and a whole bunch of movies that return Andrew Lincoln to the role of Rick Grimes.

For real, the only thing that could get me back into TWD is a show with just Carol and Daryl. They were the only reason I watched as long as I did. And now they’ve given me what I wanted. So uh, thanks? Seeya in three years?