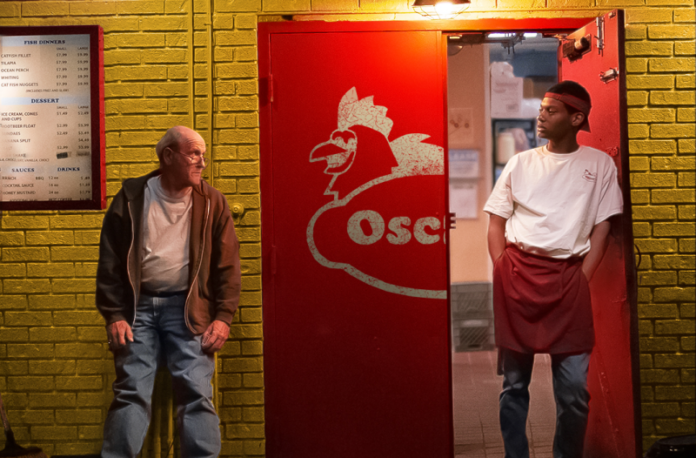 Often it’s a good thing when a Sundance film is held until the end of the year. In the case of The Last Shift, a comedy-drama starring Richard Jenkins and Shane Paul McGhie as night shift workers at a crappy fast food joint, releasing now in the middle of great turmoil for the restaurant industry has given it timeliness that wasn’t there before. It also means I may have to reevaluate my original thoughts on the film, and maybe actually write a review.

Written and directed by Andrew Cohn, The Last Shift stars Jenkins as Stanley, who is retiring from Oscar’s Chicken and Fish after 38-years of working behind the counter. But before he can leave the fast-food joint, he must train his young replacement, Jevon (McGhie), a brilliant, combative writer who is too smart for his own good. The two couldn’t be more different, and they have completely opposite views of their job. Stanley looks at his time there with pride, while Jevon sees his older counterpart as a guy who has been exploited his entire life.

The film is exec-produced by Alexander Payne, and at times it feels like one of his movies; an offbeat examination of lives rarely covered. It is, however, extremely slow and what few tensions there are don’t burn as hot as the food on the grill. Like I said, this is one that demands a fresh look after so many months, though.