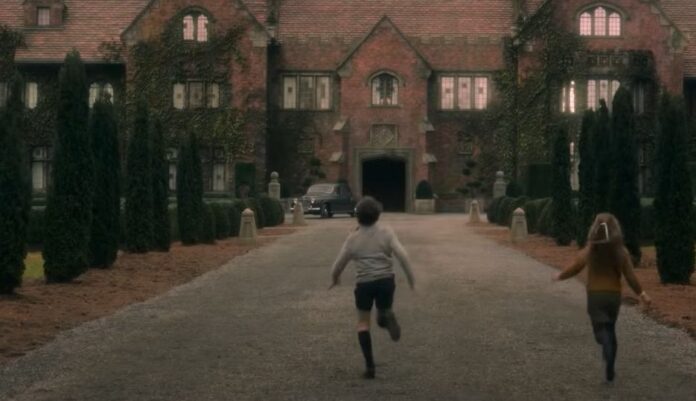 I think the world at large was pleasantly surprised by the horrific heights to which The Haunting of Hill House reached when it premiered on Netflix last year. The series brought solid performances, amazing writing, and the best executed jump scare in history together to reinvigorate the stale “haunted house” genre. The Haunting of Bly Manor, the follow up series from creator Mike Flanagan is hoping to maintain that pedigree if not surpass it following a new family in a new house and based on the official trailer (which features a chillingly amazing version of Motley Crue’s ‘Home Sweet Home’) that just debuted he’s well on his way. One of my main concerns with this follow up was that they’re ditching the house and cast that worked so well in the Hill House series. That group was just SO good and I wasn’t ready to be done with them. The scenes put together for this trailer are full of the usual fright but they also include one tidbit that may negate at least some of my concern in that Henry Thomas can be seen in a 2-3 second shot, Thomas (E.T.‘s Elliot) played the patriarch in Hill House, and while it’s not clear whether he’s playing the same character or not the shot is extremely similar to a scene that occured in that first series. The tone and theme are there for sure but one thing that sticks out is the use of dolls…I hate dolls, the way most people hate clowns. Now, thankfully, up to this point the animation of haunted dolls in film up to this point has been unbelievable at best, but it looks like they fixed those animation problems because that simple shot of a doll turning it’s head was enough to make me lock my daughter’s American Girl doll collection in a closet for the next few nights.

Check out the trailer below and look for The Haunting of Bly Manor on Netflix October 9th!

For more on this and other Netflix Originals, click here!