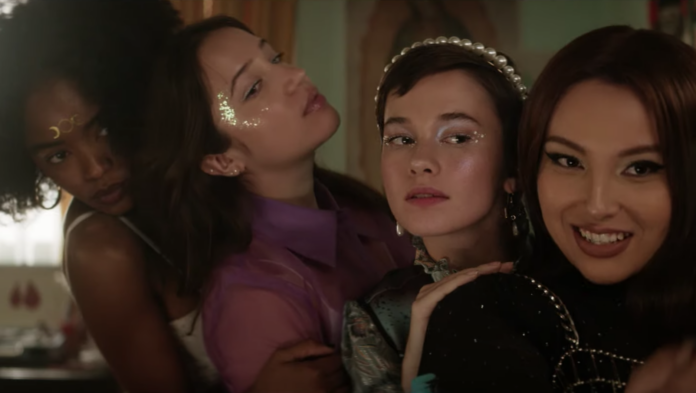 When The Craft opened in 1996, I don’t think anybody, even the director and cast, would’ve thought it would become such a timeless high school film. But mix an extremely hot cast, teenage angst, murder, and witchcraft, and you have something nobody wants to see get remade in a shitty way. Well, trust in Blumhouse and writer/director Zoe Lister-Jones, whose new film The Craft: Legacy is clearly not a remake, but a sequel.

The wiccan foursome at the heart of The Craft: Legacy are played by Cailee Spaeny (Bad Times at the El Royale), Gideon Adlon (Blockers), Lovie Simone (Sela and the Spades), and Zoey Luna.  The story remains pretty much the same, as a quarter of girls form a coven and begin exploring their powers, only to lose control and take it out on everyone around them. The cast includes David Duchovny, Michelle Monaghan, Nicholas Galitzine, and Lister-Jones who made her directorial debut with the terrific Band Aid.

The new trailer immediately thrusts you back to the original movie as the teens play a game of “Light as a feather, stiff as a board”, which is still a freaky-ass game and made for a freaky scene back in the day. But if you keep watching, it’s very clear that this movie has direct ties to its predecessor in another way.

The Craft: Legacy hits VOD on October 28th, just in time for Halloween. Honestly, I can’t wait for this.

Review: ‘Selah And The Spades’

‘Selah And The Spades’ Trailer: Power Is A Hell Of A Drug In Amazon’s Boarding School Drama