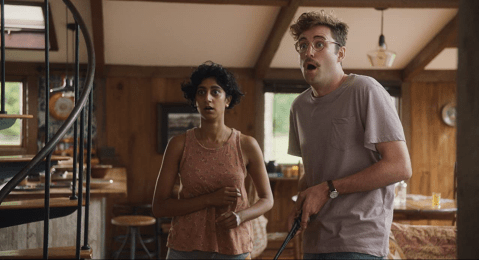 “Prepare yourselves! For a new form of extra-terrestrial terror!”, says a panicked narrator in the new sci-fi trailer for Save Yourselves!  The Bleecker Street comedy, one of my personal favorites from Sundance, stars John Reynolds and Sunita Mani as a couple who set aside their technology and go off the grid in a cabin, only to be the last people aware of an alien invasion.

And what is the world attacked by? Pouffes.

Pouffes? What the fuck is a pouffe?

Think of it as a piece of furniture. An ottoman, or as Sunita’s character Su says, “a furry foot stool.”

The trailer is done in the style of old school black & white PSA horrors, think the original Reefer Madness.

Save Yourselves! opens October 2nd with a digital release on October 6th.