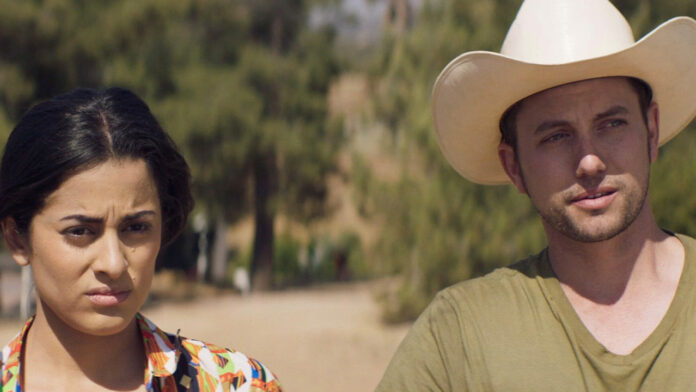 The Wall of Mexico, the new film from directors Zachary Cotler and Magdalena Zyzak, is certainly not going to be for everybody. It is filled with plenty of long, slow-moving sequences that will make plenty of viewers grow tiresome and turn it off in boredom, but it also contains some truly excellent character development and takes a tall stand by allegorically responding to Donald Trump’s statements of wanting to build a wall that would separate the United States and Mexico.

That’s when the movie works best – when it’s not afraid to show its teeth. It’s screenplay, while slow-paced, does have its occasional moments of immense strength, and it’s almost always when it has something to say politically. That’s not to say that the political stance the film takes is the only thing it has going for it though. I briefly touched upon it earlier, but the characters here are quite well realized despite the fact that the film as a whole suffered from a slow pace.

In The Wall of Mexico, we follow an extremely wealthy Mexican-American family that makes the decision to build a wall around their luxurious home ranch in an effort to prevent the townspeople from stealing their incredibly clean drinking water. Watching this rich family live their lives was genuinely entertaining and virtually every scene in which we see the family together, making conversation with one another, was enjoyable for the most part.

But something that I was greatly pleased to see was that all of the characters were fleshed out properly and never feel underdeveloped. It’s both a positive and a negative, really. Although the running time is approximately one-hundred and ten minutes, which is typically considered by most to be average length for a movie, it feels longer than it really is because of how long it takes to develop the lead characters.

It’s a positive because, by the end of the story, we get a strong sense of who everybody is but it’s also a negative because there wasn’t enough time spent in the other departments. For example, it would’ve been nice to have seen more political allegories throughout, too, because I feel like there wasn’t enough. The film oftentimes feels like it’s taking things too safe.

But there is still plenty of things to enjoy here. All of the performances are impressive and feel remarkably nuanced and layered. Alex Meneses, Esai Morales, and Xander Berkeley are just a few of the names that lead this cast full of raw power. While watching the film play out, you’ll be convinced that these are real people. It’s nearly impossible to pick a true standout among them all because they’re all equally great here.

The cast that makes up the lead family also has terrific chemistry that greatly carries a lot of the story forward. It is just quite the shame that the film takes such an incredibly long time building up to being something more than just moderately enjoyable. The first forty minutes don’t have much meat on its bones and, as I said earlier, many viewers are sure to turn the film off, but if you manage to stick around for the entire journey, you’ll appreciate the little bits of greatness along the way.

Nicholas Hoult Out, Esai Morales In As The ‘Mission: Impossible 7’ Villain