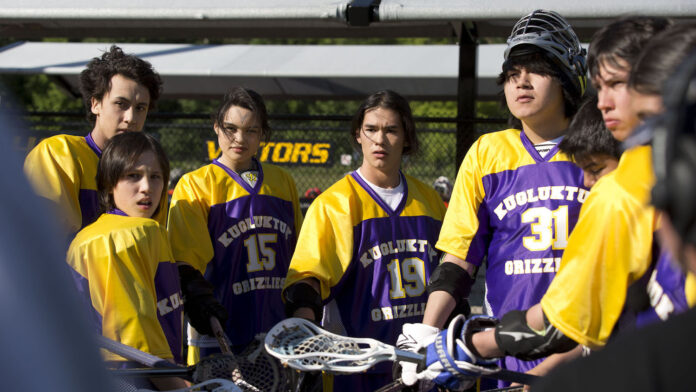 Whether you like them or not, sports movies seem to be coming out all the time. Throughout the years we have had countless films centered around various different sports such as baseball, hockey, soccer, and more. Just this year, we got Gavin O’Connor’s The Way Back which centered around a recovering alcoholic who just so happened to be a basketball coach that had to fight his inner demons in order to lead his team to victory.

Surprisingly enough though, it seems like we never get any sort of film revolving around the sport of lacrosse, which is quite strange if you think about it. It’s not some extremely obscure sport that nobody has heard of. Growing up, I never personally played lacrosse but had a ton of friends that did and loved it greatly. I think I may have to show them Miranda de Pencier’s The Grizzlies now, because this is, at its core, a moving and remarkably entertaining film that manages to be both inspiring and heartfelt, even if it does have its faults.

In The Grizzlies, we follow a group of Inuit students in the small town of Kugluktuk, which just so happens to be the town with the highest suicide rate in all of North America. These students feel lost in this world and often feel like they need something in their life to be happy about. They feel often directionless. But as soon as they discover the sport of lacrosse, their lives get transformed forever as it becomes the one thing that truly inspires them and makes them happy.

At times, the film can get legitimately dark and for a while, it can feel a little bit hopeless but not in a bad way necessarily. The film wants to hit you over the head but will eventually raise you back up. It shows you that no matter how hard things may be for you in life, you have to keep pushing and striving toward a better future.

Sometimes the film can feel a little bit messy, especially in the first act. It moves at a relatively slow pace which is definitely unfortunate considering the film is only an hour and forty minutes including credits. It takes a good while for these students to get introduced to lacrosse and for things to start picking up in the storytelling department. There are some instances in which the movie feels a tad bit slow-paced, but it’s mainly just the first act. Once the second act kicks into gear, The Grizzlies becomes a surprisingly moving and inspiring tale.

All of the actors involved with this project do a remarkable job of bringing their characters to life as well. Will Sasso, Ben Schnetzer, Tantoo Cardinal, and Booboo Stewart are just a few of the actors that manage to feel so real in their roles. Together, they all must work as a team if they want to accomplish their goals of combating youth suicide and pushing toward a better future. Each and every actor gives a performance that feels raw and emotional and even somewhat personal. There isn’t a weak link amongst the whole cast.

A large portion of the film is set outdoors and therefore, we get a ton of shots of mountaintops and various different snowy environments and they all look beautiful. It’s not only a magnificent display of the beautiful outdoors, but a testament to Jim Denault’s wonderful cinematography which feels full of life and love, further demonstrating the sheer power that The Grizzlies carries with it, even if it can feel relatively slow-paced. It will be hard to get through that first thirty minutes, but trust me – once you do, you’ll be glad you did.