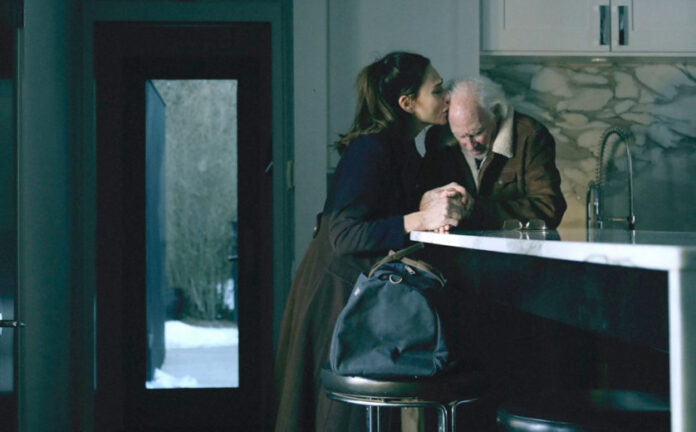 A good performance can save a movie. A great performance can make a movie seem better than it was. Lena Olin in The Artist’s Wife is a great example of that. Leading a superb cast including Bruce Dern and Juliet Rylance (Perry Mason, The Knick), Olin ends up saving this quiet and precious film.

After receiving the news of her famous husband’s dementia diagnosis, Claire (Lena Olin) tries to figure out what to do with her life next. Known for managing his renowned painting career, Claire tries to hide Richard’s (Bruce Dern) diagnosis from the art world while trying to reconnect with his step-daughter and her family. This brings up feelings of resentment, nostalgia, and love, as she questions whether or not she should try to reenter the art world, in her own right.

Lena Olin gives a captivating performance as a woman who feels trapped by love and obligation. Filled with spontaneity, her Claire feels relatable and well-rounded. She’s flawed, yet understandable, easily taking the confusing script and finding real human moments in it.  Olin, who has seemed to find a third act in her career at 65 with projects like Hunters and Welcome to Sweden, gives us a gift.

Bruce Dern, playing a charming yet cantankerous old man, plays off of Olin perfectly while still letting her do her thing. It’s an archetype that Dern seems to play a lot lately, but he does it so naturally here that redundancy can be forgiven.

The Artist’s Wife biggest problem is its uneven tone. While Olin gives the audience plenty of momentum to keep watching, director Tom Dolby can’t seem to figure out what this film is. Is it a comedy? A drama? A family melodrama? A character study? It’s possible that it’s all four, but its jaunty script and disjointed mood from scene to scene doesn’t allow it to transcend genre. The soundtrack doesn’t always gel with what you’re seeing on screen, adding to the idea that there’s too much going on onscreen. When it focuses on one thing, either Claire’s desire to go back to painting or their marriage or their relationship with their daughter as a whole, the plot touches on very touching and relatable emotional moments. It’s unfortunate that those moments of resonance get lost in baffling directorial decisions.

The take away here is that there are captivating stories left to be told about people over the age of 65. Due to Olin’s radiant performance, The Artist’s Wife feels better than it is which isn’t hard with a leading lady like that.

You can watch The Artist’s Wife on-demand and select theaters. Watch the trailer below.