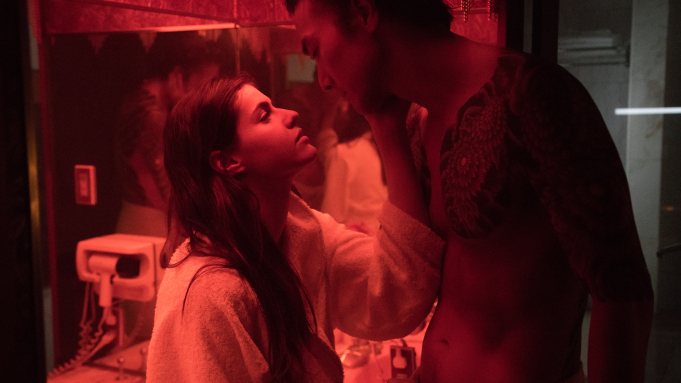 In the opening moments of William Olsson’s Lost Girls & Love Hotels, American ex-pat Margaret (a game Alexandra Daddario) staggers through the back alleys of Tokyo. Lost in the darkness, she eventually finds what she needs; a strange man who will abscond with her to one of the city’s infamous “love hotels” for a night of kinky, rough sex. Part Fifty Shades, part Lost in Translation, the film explores with great distance the duality of Japan, but its lonely, unsympathetic protagonist and flat “love” story get no such complexities.

It’s a shame, really. Those who frequent the site know of my fascination with Japan and movies set there, and this was one of my most anticipated movies of the year for that reason. The presence of Daddario, an actor I have admired for years, didn’t hurt.  But Lost Girls & Love Hotels is little more than a travelogue of Japan’s seediest corners, and while that holds a certain fascination, there is barely enough here to stretch over the 97-minute runtime.

There’s little that we know about Margaret, other than she is living two lives. During the day, she helps pronounce English to Japanese girls training to be flight attendants. The girls look up to Margaret, mostly for being an American who wears cool leather jackets, and her boss (Mariko Tsutsui) sees something of herself in her aimless assistant. At night, Margaret gets shit-faced drunk in tiny taverns with her only two friends, fellow American expatriats (Carice van Houten, Andrew Rothney), each lonelier than the next.

What energizes Margaret happens afterward, and apparently most nights of the week. Just wandering through the city she encounters men who will whisk her away to a nearby love hotel for a night of rough sex, the more bondage, the more pain, the better. Some men are shocked by her willful submissiveness; some are intimidated by it; others are very much into it.

Margaret’s meeting with the mysterious, possible Yakuza member Kazu (Takehiro Hira) finds her instantly captivated by his confidence and power. That he might be a gangster doesn’t frighten her in the least; actually, it’s part of what turns her on. He’s able to treat her the way she wants to be treated; like a whore in the sheets, but like a lady in the streets. However, when she finds out he’s hiding another secret, it sends her on a downward spiral from which she may never recover.

Being alone in a strange land is disorienting enough, and one of the things Lost Girls & Love Hotels does really well is capturing how scary this is for Margaret, who has been adrift from the beginning.  It’s about the only thing about her we can really engage with, as the film does little to flesh out who she is as a person beyond her recklessness and isolation. We do get a few details of her backstory, quickly explained and without much context, and out of necessity, we learn even less about Kazu.  Keeping him as enigmatic as possible works in the film’s favor, though. To Margaret, he is like this rare, unobtainable treasure always just out of reach. In her desperation to cling to him, she pushes away the few dependable things she has in Japan, such as her career.

Gorgeous cinematography by Kenji Katori captures the floral beauty of Japan but also the danger, providing an artful window through which to view Margaret’s struggles to find herself. From dive bars to high-end restaurants, or speeding through the city on a bullet train to reach a spiritual temple, Lost Girls & Love Hotels finds depth in setting where it doesn’t in the protagonist. Daddario proves up to a very difficult task, but the script doesn’t offer enough for us to forgive Margaret her self-destructive tendencies. She does have a certain dangerous chemistry with Hira, whose performance as Kazu is commanding but limiting in scope. I would have loved to see an entire movie of Margaret and Kazu figuring their shit out, while escalating their sexual taboos in all of Japan’s noirish lodgings.

I’ll be perfectly honest in that Lost Girls & Love Hotels might be a movie that wins me over in the long run. I’m just built to like it and will probably succumb to that at some point. But for those who don’t have a particular affinity for Japan-set dramas, it’ll come across as a well-made but empty vessel where kink is mistaken for emotional complexity.