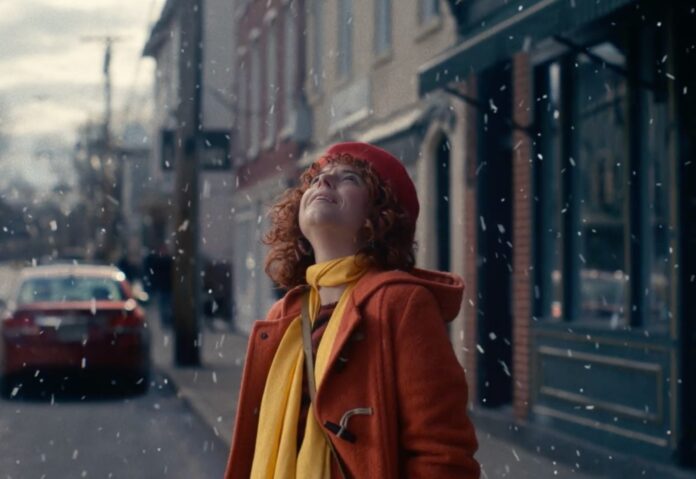 Nothing is ever as it seems in a Charlie Kaufman movie. That’s a simple disclaimer that could apply to just about film, but it’s especially true for Kaufman whose characters are many things all at once, and sometimes nothing at all. In 2004 Kaufman won a screenplay Oscar for Eternal Sunshine of the Spotless Mind, a breakup movie that was substantially more than. His latest, I’m Thinking of Ending Things, is similarly strange, engaging, beautiful, and very challenging. I’m not quite sure I understood it fully but enjoyed trying to figure it all out.

Based on the novel by Iain Reid, the film boasts an easy enough plotline, like most of Kaufman’s stories. The terrific rising star Jessie Buckley plays a woman, whose name is as mercurial as the reality around her, on the road with her boyfriend Jake (Jesse Plemons) to meet his parents. They live in a remote farmhouse, and Kaufman takes us on this weird, tense road trip where the young woman thinks she’s seeing things out in the open field that may not be there. And can Jake read her mind? If so, he’d know that she’s thinking of ending things. They’ve been together for seven weeks, but that’s enough time to know, isn’t it?

The opening stretch begins very slowly, with Kaufman’s static camera following a conversation that is sometimes strained, other times full of banter about Jake’s love of musicals, the blizzard raging outside, and other weighty topics. No matter what, there’s a grim air hanging over them, made worse by her bleak, overlong poem. At this moment she’s a poet. She’ll be something else, someone else, later. For now, she’s Lucy.

Melded into the journey is what appears to be a B-plot, following a high school janitor (Guy Boyd) going about another hum-drum day, taking in with some interest the students in performance of a play. These bits are woven into the story like flashes of a surreal memory, perhaps that’s what they are. Maybe not.

Kaufman lightens the mood considerably upon arrival at the farmhouse, but even then it’s not without first casting a dark cloud over the whole thing. Despite his mother waving at them to come in from the window, Jake insists on touring Lucy through the barn where nothing but loneliness and death await. At least Jake’s parents turn out to be fun initially. Toni Collette gives a wild, manic performance, while David Thewlis dithers on and on like a nervous Energizer Bunny. There’s something both comforting and scary about them, like a child’s toy that might spring to life.

It isn’t long before we start noticing discrepancies in the way Lucy is perceiving things. Characters age, grow young, get sick, vanish, and there’s definitely something creepy going on with Jake’s perpetually shivering dog Jimmy. Lucy changes, too. Her buttoned-up clothing, her hair, her backstory, her name. She’s warned away from a mysterious door leading to the basement, as if opening it will introduce a horror into a reality that already feels one-foot outside of normal. With the wintry conditions, it all begins to resemble the encased mini-universe inside of a snow globe, warped spherical perspective and all.

Kaufman forces you to ask a lot of questions about what is really going on. Is any of this actually taking place? Is that guy talking to an animated pig? Was that really a Robert Zemeckis rom-com interlude we just watched? And if so, why? What? How? You may even stop to ask yourself if this is a movie you want to keep on watching. It’s tough sometimes, admittedly, and Kaufman lets his scenes hang for longer than most filmmakers would, as if he’s trying to wring every ounce of comedy, sadness, and weirdness as possible.

Going back to the “nothing is ever as it seems” idea, Kaufman loves his characters who grapple with the distance between their thoughts and the world in which they live. In the case of Lucy, she recognizes that something about her relationship with Jake isn’t working, but it’s just so much easier to simply let things continue on than to make a firm decision. She bemoans being a woman out there in the world, unable to simply live her life without being seen by men. Then being unable to simply say “no” to them when it’s just easier to say “yes”. But once you start down the easy path, “yes” leads to…well, being on a road trip with a boyfriend you might not really like.

So what’s real here? Is anything real? Or are we perceiving thoughts rather than reality, and is that what’s closest to the truth? Like I said, I’m Thinking of Ending Things heaps a lot on its audience, including the brilliant inclusion of Pauline Kael’s thumbs-down review of John Cassavetes’ A Woman Under the Influence. Kael noted, as does Lucy in the film, that “Gena Rowlands is a great actress, but nothing she does is memorable because she does so much.”  In which Rowlands displays “intense suffering from nameless causes.” There’s a lot of truth in that, and it may actually answer a lot of questions about this film. After listening to Lucy’s deep insights, Jake looks as if he just wants to ask, “But did you like the movie”?

I think that’s where a lot of people are going to find themselves with I’m Thinking of Ending Things.  They’ll grapple for a while with whether they like the movie, but will find it more rewarding to unpack its many contradictions and perceptions.