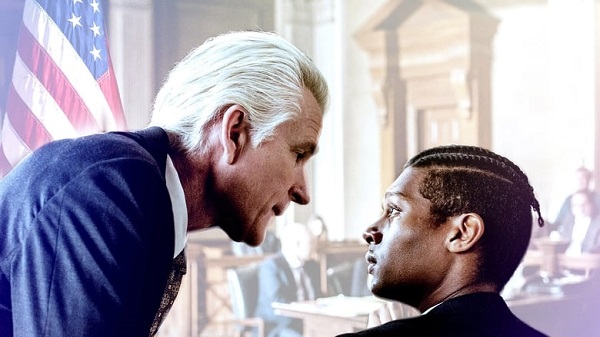 “Too many foster kids are scared, neglected, lonely, and abused” – Shaquille O’Neal

Screenwriter Jay Paul Deratany spent most of his career as a lawyer specializing in personal injury cases, but then did a C-Change when he took a case to take on a for-profit foster agency that unfortunately hid the sexual abuse history of a child before placing him in a home when he committed sexual assaults on multiple other children. This caused Deratany to take a more passionate interest in foster care, and it also birthed the idea of Foster Boy.

Directed by Youssef Delara and written by Deratany (based on his personal experiences), Foster Boy takes a look at the foster care system through the eyes of young Jamal (Shane Paul McGhie). Jamal has been in an out of jail due to an internal struggle he’s had through being moved through countless foster homes throughout his life. Even though Jamal is finishing a small sentence for drug possession, he’s also bringing a lawsuit against Bellcore, a privatized foster care company that ignored his please and buried his rape for more than 3 years as a child. Of course, it’s just one kid (already labeled a “thug”) going against a large corporation, and he doesn’t even have a lawyer on his side.

Lucky for Jamal, he has a sympathetic judge (Louis Gossett Jr.) who offers him a lifeline. Successful corporate litigator Michael Trainer (Matthew Modine) just happened to be in the court that day, and he hasn’t done his Bar Association’s required pro-bono work in quite some time and Michael is strong-armed to then defend Jamal against he Bellcore corporation. Michael really doesn’t want anything to do with Jamal. For one, he usually works on behalf of large corporations, and Michael also has a bias against Jamal as well. He initially wants Jamal to settle as soon as possible, so he can go back to his regular life. When Jamal refuses to settle and wants to push forward with his $20 million lawsuit against the corporation and specifically their manager (Pamela Dupree) who he blames for his assault. Slowly but surely, Michael starts to peel the off layers off both Jamal and the case, and it reignites his passion for the law and justice, similarly how it happened for Deratany in real life. But it’s not all easy for them as Bellcore armed with their own shark (Evan Handler) and their countless millions do everything they can to make sure the case either settles, or Jamal loses.

Foster Boy works for the most part, but it tries to go a little too hard on the John Grisham side of things as the Bellcore corporation turns from a simple corporation in the beginning of the film, but by the end of Foster Boy, they are mustache twirling supervillains orchestrating false arrests, prison assaults, hit and run attempts, phone hacking, and everything else to strain credulity. The latter part of the film tends to stress your suspension of disbelief a little, but overall is still entertaining. There is a moment that incorporates rap music into Jamal’s testimony. At first, the sheer idea of rapping in front of a jury seems comical, but it’s at a crucial moment of the film that allows pure emotion to come through from Shane Paul McGhie.

At that’s where Foster Boy succeeds: in its performances. Shane Paul McGhie is outstanding as Jamal as he manages to display raw anger and endearing sympathy at the same time. He completely displays the pain of someone who has gone through the worst of a traumatic childhood and as you go through Jamal’s journey, he really sells it. Matthew Modine also is a pro in Foster Care as Michael is at first, a paint by numbers corporate lawyer jerk, but by the end of the film, he’s an endearing and compassionate person in search of justice. Michael Hyatt and Michael Beach do great as Jamal’s final foster parents (who later adopt him) who provide their eternal support to him. Lex Scott Davis operates as Michael’s “black lawyer” and works the most with Jamal through everything, and as the Foster Boy continues, she endures as the conscience of the story, steering both Michael and Jamal in the right direction.

Even though Foster Boy in uneven and moves a little bit into an eye-rolling territory, the subject matter is what helps the film succeed. It’s clear that Jay Paul Deratany and producer Shaquille O’Neal are very passionate about the foster care system. It points out a real fact, that many in the foster care system suffer from numerous forms of abuse and neglect, and the idea that privatizing a public service like foster care (like many other services that shouldn’t be about the bottom dollar) should not be one that we all subscribe to.