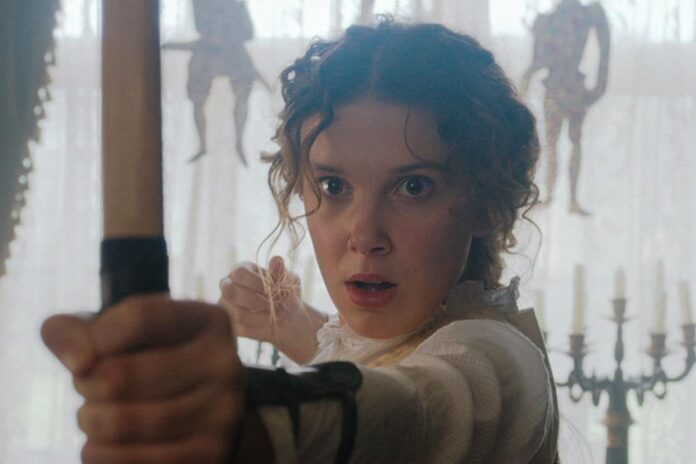 Sherlock Holmes has been re-envisioned in dozens of different ways. One of the enduring features of the character is that he can be changed, whether into an action hero like in the Johnny Depp films, or as a kid like in Young Sherlock Holmes, or into a contemporary investigator as in Elementary. But none have been quite as enjoyable, none have been so purely delightful, as Netflix’s Enola Holmes, which gives the iconic detective an equally-brilliant, twice as vital younger sister, played with an inexhaustible amount of energy by Stranger Things star Millie Bobby Brown.

Based on the first of Nancy Springer’s novels, Enola Holmes is full of adventurous, feminist spirit and fourth-wall-breaking wit. Brown plays the youthful sister to Sherlock (Henry Cavill) and Mycroft (Sam Claflin), and has lived a quirky life under the guidance of her rebellious mother Eudoria (Helena Bonham Carter). With her two older brothers gone off to live their lives, Enola was trained by her mother in fields considered manly, such as archery, brawling, martial arts, tennis, puzzles, and a considerable amount of reading. Names mean a lot in the Holmes household. Enola has always figured her name was an anagram for ‘alone”, which she felt odd because her mother was always around.

Until she wasn’t. The big mystery of Enola Holmes is the disappearance of Eudoria, who absconds on the night of Enola’s 16th birthday. Of course, these being the Holmes’, she doesn’t disappear without leaving behind a few clues. Unfortunately, her vanishing leaves Enola in the care of her brother Mycroft, who is shocked…SHOCKED I tell you, that his stubborn sister has a wild, feminist streak. Meanwhile, Sherlock is the more caring and protective of the two. And while Sherlock can figure out a suspect in a heartbeat, emotional connections with people aren’t his thing, even when it’s his sister.

Fans of Sherlock Holmes will find this caretaker side of him fascinating, placing the erstwhile investigator in a different light. However, this story is not his, key though he may be. It absolutely belongs to Enola, whose first case is full of romance, danger, and the politically-charged suffragette movement. Love sweeps into the air as she encounters the dashing Lord Tewskbury (Louis Partridge), on the run from threats he doesn’t quite understand, but Enola quickly figures out. Two stories emerge but screenwriter Jack Thorne (The Aeronauts) and Fleabag director Harry Bradbeer keep them intertwined in ways that are fun and unpredictable. There’s a legitimate mystery here that needs solving, and the plucky Enola is our perfect guide through every twist and turn.

At two-hours long, the film does begin to bog down in the second half as Enola’s attentions turn towards rescuing the Lord. His fate is tied into the tumultuous calls for revolution sweeping through London, but our interest in that is in how it affects Enola and not necessarily him. Along the way, Enola meets other women who, like her mother, refuse to be sheltered in the background. Already a free-spirit when we meet her, Enola’s journey transforms her into a woman who refuses to be satisfied with the status quo. She’s a firecracker of a hero with the strength to rely on herself and the will to help others. As wonderful as this film is, if Enola Holmes isn’t the start of a long-running franchise for Netflix, it will truly be a mystery as to why.