Fun, interesting, stylish, and hip aren’t the words that typically come to mind when thinking of chess. Good thing writer Dito Montiel and John Leguizamo, who directs and stars in Critical Thinking, have a different about chess. The film tells the real-life story of the 1998 Miami Jackson High School chess team. Mario Martinez (Leguizamo) is a Cuban American teacher at Miami Jackson High, a high school in impoverished inner city Miami. Martinez, or Mr. T as his students affectionately call him, teaches ‘Elective Critical Thinking’. Elective Critical Thinking is a class focused on chess, which Mr. T refers to as “the great equalizer.” Mr. T cares about his students and their wellbeing, even though many have given up hope on them. He imparts life lessons and wisdom all centered around the game of chess. 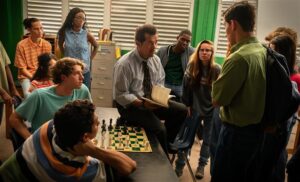 Mr. T forms a chess team from the best players in his class. The team consists of Sedrick (Corwin C. Tuggles), Ito (Jorge Lendeborg Jr.), Rodelay (Angel Bismark Curiel), and Gil (Will Hochman). They each have their own struggles, but they are there for each other – as is Mr. T. The obstacles they have to face keep mounting. Not only do many of the kids have troubles at home, but the school can’t provide funding for them in their pursuit of the state championship. Mr. T must rally the team to raise the money so they can pursue their goals. Marcel (Jeffry Batista), a late edition to the team, may be the secret weapon they need to get over the hump. Regardless of if they win or lose, Mr. T wants them to be themselves, and embrace the once in a lifetime experience they are having. 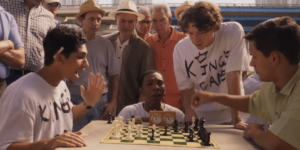 Critical Thinking makes you feel like you are actually watching high schoolers interact. Montiel and Leguizamo are able to perfectly capture the teenage spirit of the late 90s. The script and directorial decisions are on point and consistently hit the mark. The film does a fantastic job of truly having the audience care about these characters and what they are going through. Top notch acting and the sharp and witty script only help to solidify the character development that takes place. A huge aspect of the film is the humor. As teenage boys typically do when they hang out, the jokes and bashes are in no short supply. Well take that dynamic and add chess as a central focus. I’ve never heard or seen trash talking around a chess game, but it is a joy to watch. 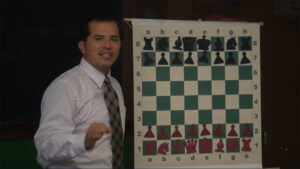 Leguizamo makes Critical Thinking a fresh and pleasurable experience and I was extremely impressed with him. In addition to his outstanding performance as Mr. T, Leguizamo’s direction was superb. The music throughout really blends perfectly with the setting of the film and characters within it and helps the flow of the film. Leguizamo adds little cinematographic elements that help make the film feel unique. Not only is the film very funny, but it is deep as well. There are numerous important messages about wealth, race, and being able to overcome hardships and believing in yourself. The fact that this is a true story only makes it even more powerful. These students being able to come from such an unforgiving area and uplift themselves is a sight to behold. Critical Thinking is a very well done and enjoyable movie – do yourself a favor and give it a watch.

‘The Clapper’ Trailer: Ed Helms Gets Famous For Being Nobody