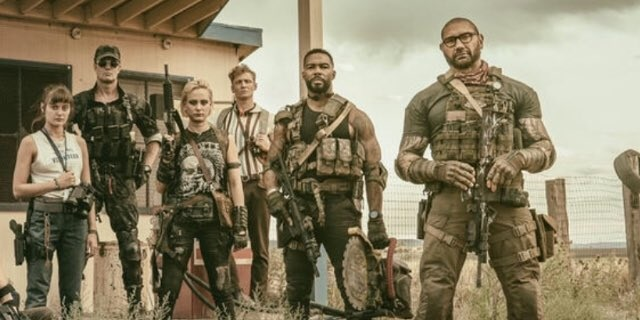 It feels like just yesterday that hatin’ on Zack Snyder was in vogue. Things have changed and these days, in the words of the immortal The Simpsons, everything’s coming up Milhouse (well…Snyder I guess). #SnyderCut has people more excited about the DCEU then ever and now Snyder’s upcoming Netflix film Army of the Dead is getting it’s own little IP universe. Army of the Dead, which is a zombie flick following a group of mercenaries attempting to pull of a heist in the middle of the apocalypse, isn’t due out until 2021 thanks to COVID delays but already we’ve got news that a prequel film AND an anime series has been greenlit by the streaming giant. The prequel film will follow the story of Matthias Schweighöfer’s character, Ludwig Dieter in the early days of the apocalypse and has yet to receive a full title. The anime series, however, has been announced as Army of the Dead: Lost Vegas and is going to be based on Batista’s character and his rescue unit as they work through the fall of Las Vegas.

I’ve been eagerly anticipating this since it was first announced, and now to find out that Netflix has the faith in it to commission two more projects, site unseen, well…now 2021 just seems too far away. Some people credit 28 Days Later for kicking off the Zombie surge of the early 2000’s  but we all know it was Snyder’s Dawn of the Dead and his running zombies that grabbed people’s interest and made the ghouls beloved again. Knowing that how can you NOT be excited about Snyder returning to the genre!

Army of the Dead releases on Netflix in 2021

To follow all of the updates on this flick make sure to bookmark this link!