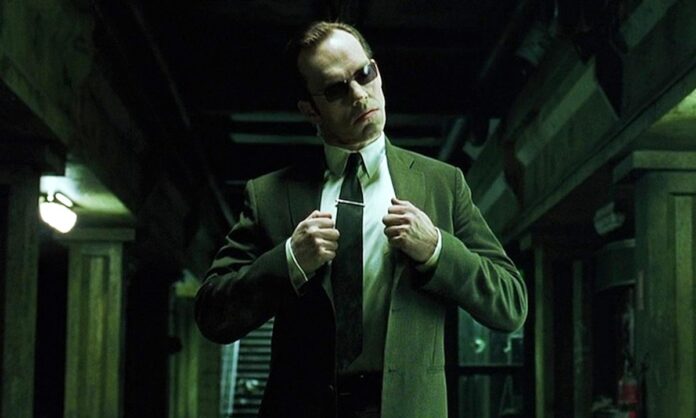 When The Matrix 4 was first announced, we assumed all of the original cast would eventually return. Keanu Reeves and Carrie-Anne Moss were definitely back, along with Jada Pinkett-Smith. We would soon learn that Laurence Fishburne, who played Morpheus, an integral figure in the earlier films, had not been asked to reprise the role. And now it turns out we won’t be getting Hugo Weaving as Agent Smith, either, although it sounds like he nearly was.

Speaking with Comingsoon, Weaving says that he was asked by director Lana Wachowski to be in The Matrix 4 early on, but things fell apart during negotiations…

“Lana Wachowski had rung me at the beginning of last year. We’ve worked together five times, the Wachowski’s and I on three Matrix films, V for Vendetta and Cloud Atlas. I’ve hung out with them all over the world for many, many years. So, yes, Lana was very keen for me to be involved in The Matrix. There was a reading with Keanu, Carrie and myself and a few others from the old family.”

Weaving continued, “I loved a lot of it and wasn’t sure about other bits. Ultimately, we talked about it and when the offer came through to do it for Warner’s I said yes the next day and I talked to Lana.”

It was at that point when Lana suddenly decided against it…

“I thought we could have done my scenes in May, June and July; and we talked about money and we talked about — they were negotiating,” Weaving added. “And we were all pretty much sorted and agreed on dates and it was all fine, but then Lana decided she didn’t think it was going to work. So, she pulled the plug on the negotiations. That’s where it ended up. She basically didn’t feel that my commitment to the National Theatre was going to fit in with the dates that she had in mind for me.”

That’s a shame. Agent Smith’s menacing “Mr. Anderson” is one of my favorite things about the earlier films. Weaving says he’s “looking forward” to seeing what Lana Wachowksi does, but we may never know what she had planned for Smith and his fellow agents.