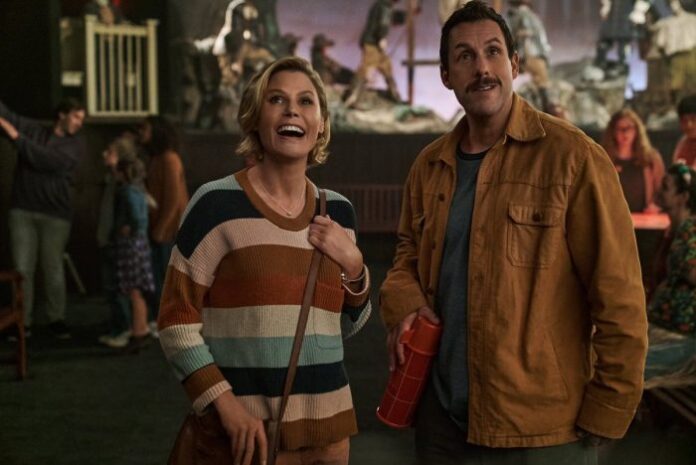 Believe it or not, but Adam Sandler is sort of on a creative roll right now. He’s coming off the best reviews of his career for Uncut Gems, that rare film which displays his dramatic skills. On the flipside, his most recent comedy Murder Mystery was…well, it was actually pretty damn funny and a gigantic hit for Netflix, who quickly signed him to an extension of their exclusive deal. And the first movie in that new deal? It’s Hubie Halloween. Enjoy.

As we said during yesterday’s first-look reveal of the spooky holiday comedy, Hubie Halloween finds Sandler as a guy in the witchy town of Salem, MA who must keep everyone safe when actual monsters come out to play.

SYNOPSIS: Hubie Dubois (Adam Sandler) thanklessly spends every Halloween making sure the residents of his hometown, Salem, celebrate safely and play by the rules. But this year, an escaped criminal and a mysterious new neighbor have Hubie on high alert. When people start disappearing, it’s up to Hubie to convince the police (Kevin James, Kenan Thompson) and townsfolk that the monsters are real, and only he can stop them. Hubie Halloween is a hilarious family film about an unlikely hero with an all-star cast including Julie Bowen, Ray Liotta, Noah Schnapp, Steve Buscemi and Maya Rudolph, produced by Happy Madison.