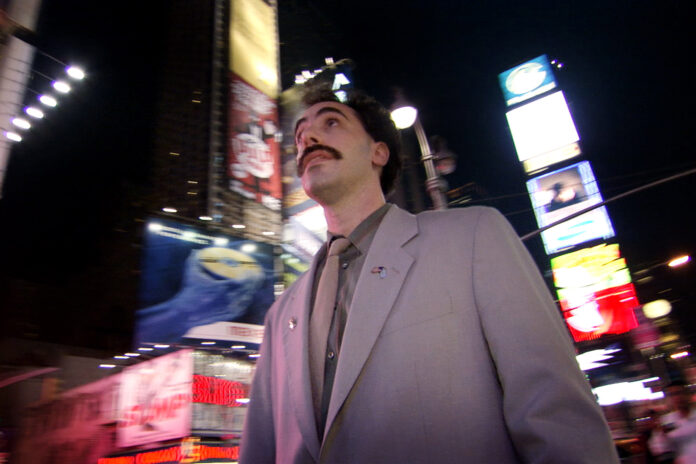 Oh my. So what does it say, after a shit show of a Presidential debate, when Borat drops a teaser praising your victory? Definitely not good things for your candidacy.  But that is exactly what has happened to Donald Trump today as he became the star of Sacha Baron Cohen’s hype for Borat 2.

What’s funny is that Cohen actually released this teaser BEFORE the debate occurred, and yet in it he praises Trump for winning. He calls him “strongest Premier in history. He’s not racist. Black guys love him so much they kneel before him”, with pictures of Kanye West, Diamond & Silk, and NFL players flashing the screen.

This is Cohen using the Presidential debate to draw attention to his sequel, which was completed in secret earlier this year and just found a home at Amazon Studios. With the promise Borat 2 will arrive ahead of Voting Day, this teaser is just a taste of what Trump, and any politician caught in Borat’s web of pranks, have to look forward to.

Titled Borat: Gift of Pornographic Monkey to Vice Premiere Mikhael Pence to Make Benefit Recently Diminished Nation of Kazakhstan, the film finds Borat now too famous around the world, so he must go deep undercover to score interviews with famous and powerful people in order to make them look like ass-clowns. Vice President Mike Pence is said to be caught on tape, along with Rudy Giuliani, so they might want to look out.

Congratulation to great friend of the Kazakh people @realDonaldTrump for winning debate today! Impressive and amazing result for a strong premier who always put America and Kazakhstan first! pic.twitter.com/qLljQ8b5UU