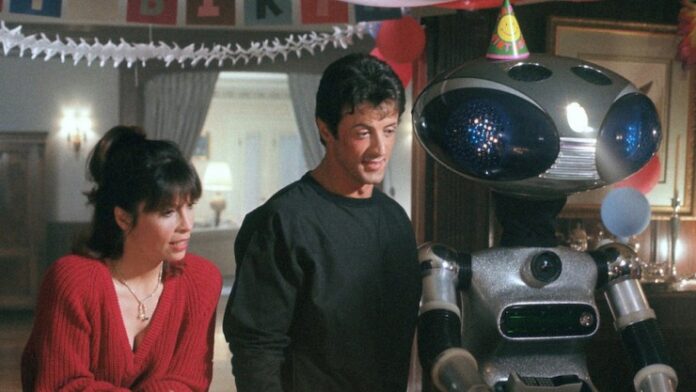 The Rocky franchise has been around long enough to have its share of ups and downs, perhaps more downs than ups. But what’s interesting about it to me is that, regardless of quality, each movie has memorable moments and a fanbase. I know people who actually like Rocky V, for chrissakes. Rocky IV may not be the best, but is there anybody who doesn’t know what Ivan Drago did to Apollo Creed?

Rocky IV is coming up on its 35th anniversary (!!!), and MGM is planning a new release that will feature Stallone’s director’s cut. Was there a hashtag for this? Must’ve missed that.

Stallone said on Instagram, “For the 35th anniversary Rocky 4 Is getting a new DIRECTORS cut by me. So far it looks great. Soulful.. Thank you MGM For this opportunity to entertain.”

While we have no idea what changes Sly wants to make, we do know he’s cutting out the most important character of the movie.

Stallone, who wrote and directed isn’t a fan of the android gift, given to Paulie by Rocky as a means of spreading his wealth. The robot, oddly, has a share of fans, too, even though its scene is by far the weirdest of the entire film. Really hard to take anything seriously after that.

Asked by fans about the new cut and the future of Paulie’s robot, Stallone responded with “The robot is going to the junkyard forever, no more robot”, and “I don’t like the robot anymore.”

Here’s hoping that Stallone, Dolph Lundgren, Carl Weathers, and the robot do some press for this new Rocky IV when it’s out.

For the 35th anniversary Rocky 4 Is getting a new DIRECTORS cut by me. So far it looks great. Soulful.. Thank you MGM For this opportunity to entertain.

Sylvester Stallone Says Rocky Might Be Done With ‘Creed’, But He’s Not Done With ‘Rocky’

A New ‘Demolition Man’ Is Being Worked On By Sylvester Stallone