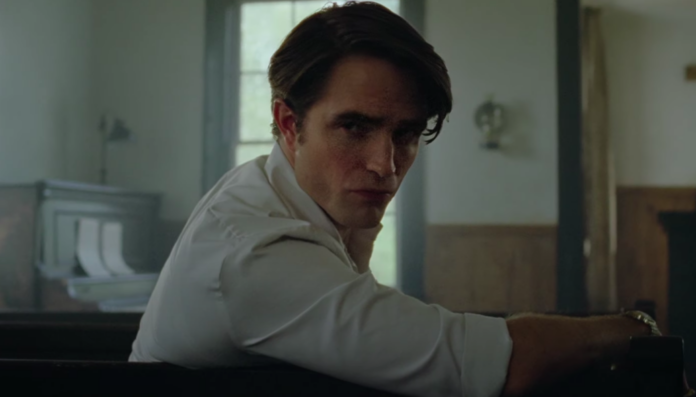 So at this point you know about the incredible, star-studded cast of Netflix’s The Devil All the Time. It’s just one reason why it may be the ACTUAL most anticipated movie of September and not Christopher Nolan’s Tenet. Certainly, it ranks higher on the must-see list for me. But we shouldn’t ignore the man behind the camera, Antonio Campos, who after three critically-lauded indies in Afterschool, Simon Killer, and Christine, sets off on what could be the film that makes him a household name. If directing an episode of Marvel’s The Punisher didn’t do it, this oughta do it.

After a couple of weeks of being teased with promo images, the first trailer has finally arrived. It starts with Tom Holland’s character, a young man from Ohio, receiving the gift of a battle-worn gun pistol belonging to his father, and immediately we know its days of seeing violence aren’t over.

Holland is joined in the cast by Bill Skarsgård, Riley Keough, Jason Clarke, Sebastian Stan, Haley Bennett, Harry Melling, Eliza Scanlen, Mia Wasikowska, and Robert Pattinson. You might have heard of them. They’ve done a thing or two.

The multigenerational tale is co-written by Campos and his brother, with Jake Gyllenhaal as a producer. The big names just don’t quit.

SYNOPSIS: In Knockemstiff, Ohio and its neighboring backwoods, sinister characters — an unholy preacher (Robert Pattinson), twisted couple (Jason Clarke and Riley Keough), and crooked sheriff (Sebastian Stan) — converge around young Arvin Russell (Tom Holland) as he fights the evil forces that threaten him and his family. Spanning the time between World War II and the Vietnam war, director Antonio Campos’ THE DEVIL ALL THE TIME renders a seductive and horrific landscape that pits the just against the corrupted. Co-starring Bill Skarsgård, Mia Wasikowska, Harry Melling, Haley Bennett, and Pokey Lafarge, this suspenseful, finely-woven tale is adapted from Donald Ray Pollock’s award-winning novel.