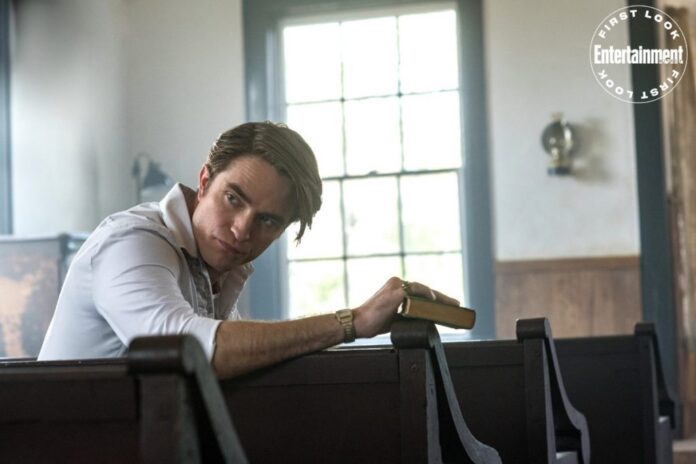 There’s at least one anticipated 2020 film that won’t be at the mercy of nervous movie theater owners. Netflix’s The Devil All the Time boasts one of the most packed A-lists cast we’re going to see all year with Tom Holland, Robert Pattinson, Bill Skarsgård, Riley Keough, Jason Clarke, Sebastian Stan, Haley Bennett, Mia Wasikowska, and Eliza Scanlen. Hot damn. And now we have the first images for the film by Christine and Afterschool director Antonio Campos.

What kind of story could bring together this level of talent? The Devil All the Time is based on Donald Ray Pollock’s novel which tells a multigenerational story of a troubled Midwestern family in the years following WWII. The characters include a false prophet, a husband and wife who are serial killers, and a disturbed war veteran.

Speaking with EW, Campos talked about taking Pollock’s complex novel and its many characters and adapting it for the screen…

“It was a hard book to adapt also because there was so much that we loved. I’m a big fan of southern gothic and noir and this was a perfect marriage of the two. Sometimes you might be adapting a piece and you think like, Well, there is a seed of a good idea here and I’ll just throw everything away and start from scratch. In this case it was like, we love everything!”