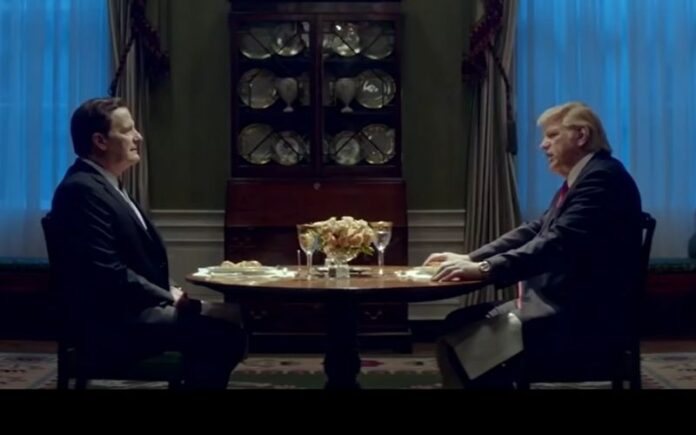 His first term isn’t even over, and yet every other day there’s a new scandal exposed of Donald Trump’s epic criminality and corruption. The number of books that have been written about his crimes has become its own little market, and the same appears to be happening in the world of TV and film. The Showtime miniseries The Comey Rule, based on the book by ousted FBI chief James Comey, is just the latest of what will undoubtedly be many projects on the illegal occupant of the White House.

The Comey Rule stars Brendan Gleeson in the role of Trump, with the towering Jeff Daniels looking quite a bit like Comey. You’ll recall that Comey discovered ties between the Trump campaign and the Russian government during the 2016 Presidential Election. Trump fired Comey after demands for his loyalty failed to get the response he wanted. Let’s just say there’s a reason Comey’s book is titled A Higher Loyalty.

SYNOPSIS: Jeff Daniels and Brendan Gleeson star as former FBI Director James Comey and President Donald J. Trump in this two-part event series that tells the story of two powerful men, whose strikingly different ethics and loyalties put them on a collision course.

‘In Bruges’ Reunion As Martin McDonagh, Colin Farrell, & Brendan Gleeson Reunite For ‘The Banshees Of Inisheer’