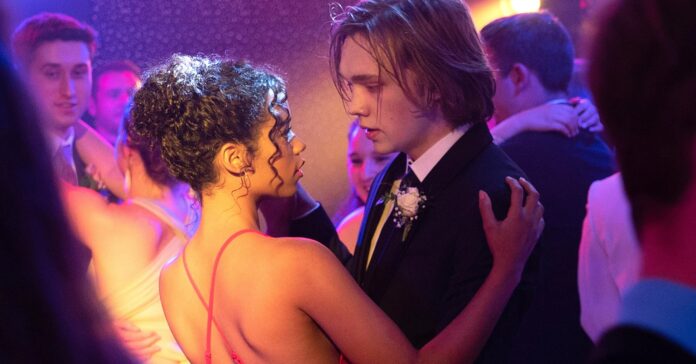 After watching Words on Bathroom Walls, I was truly stunned to see that it was directed by Diary of a Wimpy Kid director Thor Freudenthal. Don’t get me wrong, I loved watching young Greg Heffley’s middle school first-world problems, but it’s not a masterpiece or anything. It’s a fun children’s flick that parents can show your youngsters in the hopes of entertaining them and putting a smile on their face, and for most kids, it did exactly that.

Freudenthal isn’t really a director that is known for making rather serious movies. His films are all a little bit goofy, such as the aforementioned Wimpy Kid as well as Percy Jackson: Sea of Monsters. The reason why I was so surprised that he directed this movie was because it was actually a remarkably mature teen-centric coming-of-age story that is going to mean a lot to schizophrenic youth.

In Words on Bathroom Walls, we follow a teenage boy named Adam Petrazelli who absolutely loves to cook. He always cooks fancy chicken dinners for his mother and her boyfriend Paul who both greatly enjoy and appreciate his meals. He dreams of one day being accepted into culinary school so he can become a professional chef. It’s what he loves to do more than anything else in the whole world. The only problem is that he is schizophrenic. He feels like he is an outsider and thinks that nobody is going to accept him. He’s almost scared to come to terms with who he is.

Along the way, we see how this disorder seriously impacts his life. One moment he will be laughing and having a good time with his parents, and the next he hears a creepy, loud voice talking to him. He starts to see the doors in his house start to open and shadows begin to consume the walls, and eventually, him.

But, when he meets a girl at school named Maya (Taylor Russell), his whole life starts to change. The only thing that makes him happier than being around Maya is cooking. She is the only person that genuinely understands him, and doesn’t make him feel bad. She always tries to be on his level and to make him feel like he is accepted. They both mean a lot to each other, and seeing their beautiful relationship blossom onscreen was wonderfully sweet and uplifting. Charlie Plummer and Taylor Russell have truly outstanding chemistry with one another here. They feel like they are actually best friends in real life. I never once saw the actors here. I saw Adam and Maya. They brought these characters to life and made it look easy.

It’s also a surprisingly funny movie with a lot of the jokes landing quite well. Screenwriter Nick Naveda injected a ton of heart and love into this screenplay and it shows. It’s the type of movie that will make you feel warm and cozy inside, but also isn’t afraid to show the dark and scary side of things, especially when it comes to Adam’s schizophrenia.

This is not a perfect movie, however. One of the biggest issues I have with Words on Bathroom Walls is its pacing. The majority of the first act feels rather rushed and I didn’t feel like we spent enough time with the characters for the first little while. It seemed as though the filmmakers wanted to get us into the more juicy and entertaining second act rather quick, and I wish that the story had slowed down just a tad.

Also, the film can suffer from a lot of exposition as a result. Every once in a while, we will cut to Adam talking to the camera as he basically explains his whole life story up until this point and it comes across as frustrating and lazy. It would have been nice to have gotten some more visual storytelling in the bunch, but this gratefully doesn’t happen too often and it mostly doesn’t detract from the story.

As a whole, Words on Bathroom Walls is an excellently moving coming-of-age story of a young boy with schizophrenia that is going to mean a lot to kids that also suffer from this disorder. It never once talks down to people that have it, but rather, it gets on the same page with them. It understands the disorder and it tells a beautiful story of learning to love oneself for who they are because, at the end of the day, we are all beautiful no matter what disorders we may suffer from.