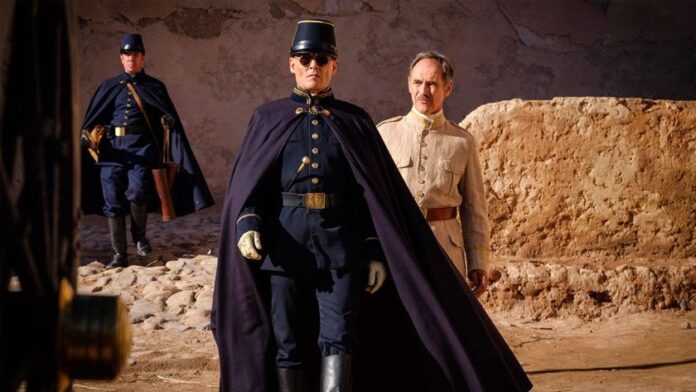 While a funny line of dialogue in Black Panther may have made “colonizers” a punchline for the moment, there’s nothing humorous about them in Waiting for the Barbarians. Adapted by J.M. Coetzee based on his own novel, the film version is directed by Ciro Guerra, who explored the impacts of white colonizers on native people in greater, more adventurous detail in Embrace of the Serpent and again in last year’s Birds of Passage. Here, he’s more interested in painting an unfortunately timely picture of a brutal regime’s mad grab for power by casting the “other” as a dangerous and violent threat in need of conquering.

Appropriately enough, Guerra’s most ambitious effort, his first English-language film, stars three huge names: Oscar-winner Mark Rylance, Johnny Depp, and Robert Pattinson. The star-studded trio star in a film that presents itself as historical drama, but works just as well as a metaphor of the terrible oppression Indigenous people continue to face. Rylance plays an unnamed Magistrate in a far-off borderland ruled by the British empire. He’s lived there in relative peace with the locals, and ruled them gently, having allowed them to live their lives freely. Disputes are settled quickly and without incident. He clearly loves the place and its people, soaking in the quiet like a sponge.

While the tranquility of the early-going can be a bit tedious, it’s an effective way to contrast the chaos brought by the arrival of Depp’s Colonel Joll. Arriving with a gaunt face, cold demeanor, and peculiar eyewear that makes him look like the villain from Who Framed Roger Rabbit, Joll has no interest in peace. He comes with warnings of a possible barbarian invasion, and he’ll use “advanced” interrogation techniques on the locals to get information.  His actions appall the Magistrate, who has also begun to have feelings for a woman (Gana Bayarsaikhan) brutalized by Joll’s men. In his efforts to treat her wounds and show her a simple measure of kindness, the Magistrate puts himself in the crosshairs of Joll and his equally merciless colleague, Officer Mandel, played by Pattinson.

There isn’t a lot of subtlety to this story, but that actually works in its favor. The Magistrate is seen as the rare paragon of virtue, while Joll is almost cartoonish in his evil. Depp employs the same sneer and precise enunciation as his Grindelwald in the Fantastic Beasts movies. While his presence doesn’t necessarily hurt the movie, Depp always gives the impression he’s doing his own thing compared to everyone else, and that can be distracting.  Pattinson strikes a menacing image as Mandel, but his part is tiny and one-note.

Broken down into distinctive seasonal chapters, the cinematography is simply gorgeous with Oscar-winning DP Chris Menges capturing Morocco’s natural beauty. In particular during the autumnal sequence “The Return”, we see nature vividly capture the swirl of emotions within the Magistrate as he attempts to make good on a promise, even though he knows it will come with terrible consequences.

In its exploration of ruling by the closed fist or the open hand, Waiting for the Barbarians finds that, at least for those being ruled, it’s all the same. For the natives, what matters one invader over another? This is a cruel lesson the Magistrate comes to learn, even as he shoulders the weight of guilt for what these conquered people are being put through. Guerra refuses to shy away from stark images of inhumane treatment. Some of the tortures inflicted are simply grotesque, including one scene in which the “barbarians” are strung together by wires through their cheeks.

Just looking at it from a U.S. perspective, Waiting for the Barbarians parallels many terrible aspects of our history. From the conquering of Native Americans to our use of torture during the Iraq War, to the current Administration’s demonization of black and brown people, Guerra forces us to examine our own part to play in allowing these things to happen in our name.

Waiting for the Barbarians review pics
1 of 4

Warner Bros. Has No Plans To Fire Johnny Depp Or Amber Heard From ‘Fantastic Beasts 3’ or ‘Aquaman 2’