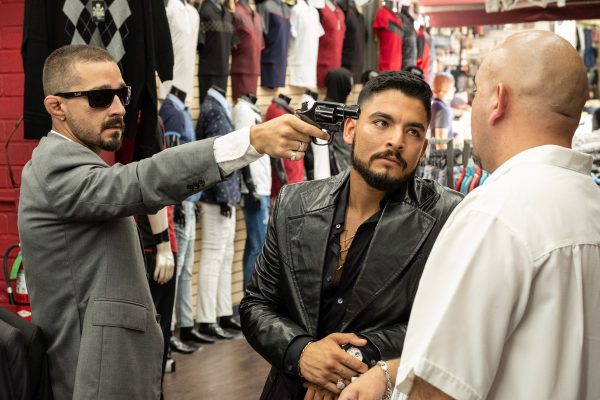 Trust me. I get it. I honestly do. David Ayer’s gritty street films are culturally insensitive, crazy violent, and thin on plot. As someone who has watched literally every movie he’s done, I know the drill going in. There’s little that’s different about his latest, the gang warfare saga The Tax Collector, but it’d be lying to say it didn’t grab me. Because for all of the many things that can be frowned upon in the movies Ayer does, he’s always smart enough to lean on strong performances, and he gets one from star Bobby Soto.

That may come as a surprise for those who have seen a tatted up Shia LaBeouf plastered all over the promos. It’s true, LaBeouf is a heavy appropriately-named Creeper, and he strikes a surprisingly imposing figure as a crime cartel’s wild attack dog. But his performance, resembling a white boy trying to sound like Machete because it’s a white boy trying to sound like Machete, is a distraction from the movie’s real star. I don’t know Bobby Soto; he’s new to me, but he has a charisma and real presence as David Cuevas, a “tax collector” for an unseen crimelord named Wizard. David and Creeper basically strong arm the other gangs to give up a cut of their earnings, and you can guess what happens to those who don’t pay up.

David and Creeper’s daily routine isn’t that far off from the corrupt cops of Ayer’s End of Watch or the police partners of Training Day, which the director also wrote. They speed around L.A., talkin’ shit and roughing up whoever needs it. Unlike Creeper, a violent loner whose loyalty is more to his compadre than to anyone else, David has a wife (Cinthya Carmona) and kids to look out for, with a mobbed-up uncle (George Lopez) looking out for him. The duality of his criminal and domestic life is a subject Ayer has tackled before, but there’s a greater emphasis on it here, even as David’s world spirals into bloody vengeance.

For a good stretch, The Tax Collector seems pretty aimless. David is a good hand, but he doesn’t seem to have the raging ambition most figures in these movies do. That all changes with the arrival of Conejo (rapper Jose Martin), an angel of death sent in to take over the streets, which are soon running red with the blood of friends and family.

Ayer has done so many of these gangland movies he’s got it down to a science. The Tax Collector is virtually indistinguishable from Harsh Times, Street Kings, and even Bright minus the orcs and shit. The L.A. streets are a dangerous, bullet-riddled nightmare, and everybody is a macho thug looking for an excuse. The “yo vato” lingo may make sense, but coming from LaBeouf it proves problematic. Don’t get me wrong…I get what Ayer and LaBeouf are going for with Creeper. Minus the extreme violence, I’ve known guys like him who have appropriated the culture of others so deeply they take on perceived mannerisms. It’s not that LaBeouf is even bad in the role. Tatted up, sneering, cauliflower-eared, and with piercing, intense eyes, he looks like someone who has done a lot of dirt and been in his share of scraps.

It’s just a shame that LaBeouf takes away from Soto, who believably portrays a man crushed beneath two worlds that cannot coexist without bloodshed. Even though the script often sounds like it was intended for Grand Theft Auto or Saint’s Row, Soto makes the best of it as David begins to assess the impact of his criminal ways.  But there’s no time to dwell on that for too long. The Tax Collector ends the way we knew it would right from the beginning; in a hail of gunfire and murder. At least Ayer delivers what we all came for; a conclusion as certain as death and, well, taxes.