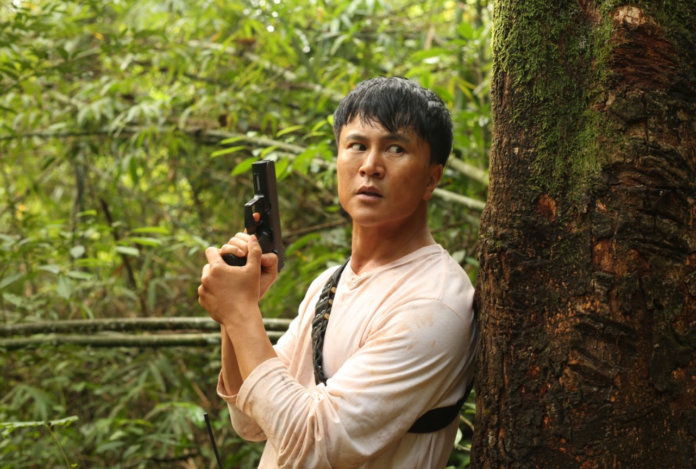 Going undercover as a cop is typically a risky endeavor, but The Prey takes that to a whole new level. Xin (Gu Shangwei) is a Chinese cop that is on assignment trying to infiltrate a mafia phone scam. Before he knows it, he is being arrested and taken to a Cambodian prison located in an international neutral zone. The prison Warden (Vithaya Pansringarm) has a lucrative side business allowing wealthy hunters a chance to hunt the prisoners. After a bit of torture and a couple brawls, Xin is part of the group selected for the next hunt.

Mat (Byron Bishop) is a repeat customer of the Warden. This time he brings his nephew ‘T’ (Nophand Boonyai) and friend Payuk (Sahajak Boonthanakit) along for some bonding. Admittedly you have to have some screws loose to want to partake in hunting humans. So even Mat thinking his nephew is crazy is a sign for concern and bad news for Xin. ‘T’ has money though, and in the Warden’s mind, that’s all that really matters. Xin’s colleagues are trying to track him down, but it may be too late. Xin and the rest of the lucky few are taken to the edge of a jungle and told to run. Immediately the bullets start flying and Xin realizes it will take everything he has to try and make it out alive.

When it comes down to it, The Prey is a mindless action film. Not only that, it retells a story we’ve seen time and time again. The thing that works best for The Prey is its simplicity. The film is a no-nonsense action. There is no character development whatsoever and it really isn’t needed. We have an arsenal of different weapons, blood, action, screaming – all the basic action elements surrounding a flimsy plot. Writer/director Jimmy Henderson (Jailbreak) features the juxtaposition of violence with happy/uplifting music. It is a pairing that he embraces throughout the film. While not unique, it is still enjoyable and fits in with the madness surrounding it. Add in some interesting camera angles and throwback fighting moves/sounds and Henderson has found an interesting combination. 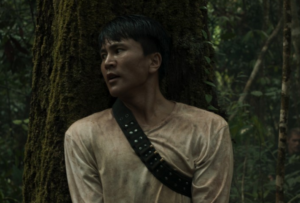 The problems arise when the film gets away from its basic formula. There are times when Henderson and fellow writers Michael Hodgson and Kai Miller lose what makes The Prey work. They get bogged down trying to add depth and build relationships. While welcomed in many films, The Prey is best served without anything getting in the way of the action. The Prey toes the line between being a complete shitshow and trying to find rhyme and reason with a backstory. It would have been better served just sticking to being a complete shitshow. When the dust settles, The Prey has some fun action and enjoyable moments. The Prey doesn’t have much longevity or anything that sets it apart, but if you’re looking for a quick action flick – then it might be just what you’re looking for. The Prey is available August 25th on all major VOD platforms.