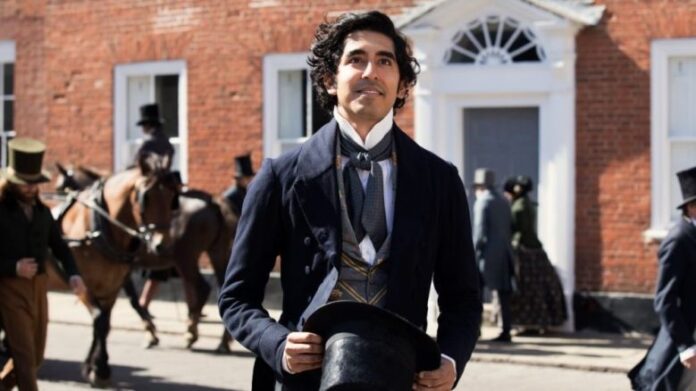 As the man behind such biting political satires as In the Loop and Veep, Armando Iannucci makes an interesting choice for an adaptation of Charles Dickens’ The Personal History of David Copperfield. Iannucci’s jab at the lily-white rags-to-riches story is to cast Dev Patel in the titular role, surrounded by a cast as ethnically-diverse as the many colorful characters that populate Copperfield’s world. The effect is somewhat similar to what Lin-Manuel Miranda has done with Hamilton, to place people of color as iconic literary figures, to see a bit of our America reflected back at us in this light-hearted tale of prosperity.

The familiar beats of Dickens’ classic are here, if trimmed down and given a humorous polish by Iannucci and co-writer Simon Blackwell. Beginning in incredibly earnest,  perhaps overly earnest fashion, the film sets up a meta framing device with an older Copperfield performing a live reading of his autobiography. It’s a dull setup that I would’ve expected Iannucci to have more fun with, and the same goes for the entire early section of Copperfield’s story. Even at a 2-hour runtime, there’s a quickened pace through Copperfield’s childhood. Born to a widowed mother (Morfydd Clark, who plays dual roles), Copperfield lives a happy life until she is wedded to the stern, abusive Mr. Murdstone (Darren Boyd). Along with his spinster sister (Gwendoline Christie), Murdstone conspires to have Copperfield sent away to work at one of his bottling factories, where the boy would toil away for years in poverty.

Fortunately, not everyone in Copperfield’s life is so grim, and the movie is instantly better as he embraces more comedic characters. Tilda Swinton and Hugh Laurie light up the screen as Copperfield’s donkey-obsessed aunt Betsey Trotwood, and her oddball friend Mr. Dick who is prone to distraction by thoughts of kites and King Charles’ decapitated head. Also a hoot is Peter Capaldi as the debt-ridden Mr. Micawber, whose antics to avoid creditors are always funny.  It’s often been said that these characters in particular represent different facets of Dickens’ personality, and his view on social mobility. More than any other, Iannucci’s political wit comes through in them, which is to our benefit because all three are so good. Without them, this would be a much darker, stuffier movie.

Others that help this film feel more contemporary are Benedict Wong as alcoholic attorney Mr. Wickfield; Ben Whishaw as the story’s resident Eddie Haskell wannabe, Uriah Heep; Daisy May Cooper as the reliably kind Peggotty; Morfydd Clark in her other role as the dainty, naive Dora Spenlow; Aneurin Barnard as Copperfield’s ruinous pal Steerforth; and Rosalind Eleazar as lovelorn friend Agnes Wickfield. She has a terrific array of hats.

A few of the novel’s subplots key to understanding Copperfield’s feelings about love and class division are pushed aside. The most disappointing of these involves his first marriage to Dora, which is literally “written out” in a scene and never spoken of again. Patel’s upbeat, overzealous performance matches the tone Iannucci is going for, which is to mostly skim over Copperfield’s times of true struggle or turn them into punchlines. There’s an episodic feel to The Personal History of David Copperfield as a result, but that works in making this Dickens classic truly Iannucci’s own. While the societal issues of which the novel is known to address are glossed over, they aren’t necessarily discarded, either. Iannucci both embraces and recreates to attract a new audience who have never seen fit to experience Dickens for themselves.