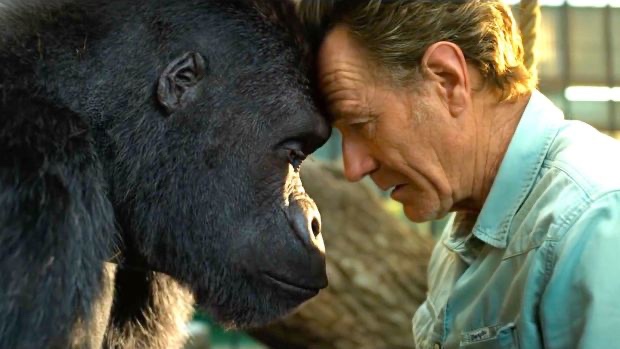 The beginning of the pandemic brought us, Tiger King, the epic tale of exotic animal keep Joe Exotic and Carole Baskin. People seemed to pick sides and root for people who at the end of the day mistreated animals. The “end” of the pandemic (probably not though, right?) is giving us the opposite story. The One and Only Ivan. Based on the Newberry Award Winning book by K.A. Applegate, the story was inspired by a real gorilla who lived in a Washington Mall for 27 years before being released to Zoo Atlanta. Disney’s adaption of the book, while sleek and sweet, ultimately completes its goal as a parable calling for a closer look at the treatment of animals.

Ivan (Sam Rockwell), a silverback gorilla, is the star of the Big Top Mall, a mall with its own circus show. Adopted by mall owner, Mack (Bryan Cranston), at a very young age, Ivan is content with his repetitive, yet simple existence amongst the dwindling crowds and his friends Bob the dog (Danny Devito) and Stella the elephant (Angelina Jolie).

To try to drive up business, Mack orders Ruby (Brooklynn Prince), a baby elephant. At first, this annoys Ivan, until he starts to get to know her. Through telling her stories and developing his own passion for drawing, Ivan starts to realize that his existence should be bigger than his cage and his ticket out of there for both him and Ruby could be art.

Director Thea Sharrock, known for the saccharine Me Before You and THAT stage production of Equus starring Daniel Radcliffe, handles the subject well-choreographed grace. She, along with Bryan Cranston, don’t demonize or villainize mall owner Mack, instead portraying him with much complexity, through the eyes of Ivan and at arm’s length.

Tonally, the film reminds me of the animal movies of the late eighties and nineties, where they weren’t afraid to be sad and handle tough topics. Remember Babe anyone? Though they do lay on the emotion pretty thick and heavy-handed towards the film’s end, they handle the subject matter of animal neglect and the question of captivity pretty delicately. Screenwriter Mike White does try to add some comedy in the secondary characters that don’t land most of the time, overall he finds a way to convey serious topics in a kid-friendly way.

Disney is definitely learning their lesson from last year’s The Lion King; the CGI animals here showing emotion and life behind the eyes while staying relatively realistic. Rockwell, Jolie, and Prince give some of the most natural voiceover performances I’ve ever heard, nothing phony or overplayed about them. This adds to the film’s best quality: that it depicts animals as complex beings capable of emotion.

Over the past fifteen years, “talking animal” movies often showed animals as one-dimensional characters with the main goal to party. This year’s Dolittle is a great example of this, overlooking the neuroses of the characters and depicting them as fun-loving things there to serve the human lead. The One and Only Ivan doesn’t gloss over the characters’ pain, instead choosing to focus on uncovering it. Mack is more of a complicated and amplified secondary character and his animals have needs and wants that aren’t centered on him. Its message, though very Disney-fied and ironic coming from a company that refuses to pay its theme park workers a living wage, is that living things deserve respect and love and are not there solely for the amusement of others.

You can watch The One and Only Ivan on Disney+. Watch the trailer below.