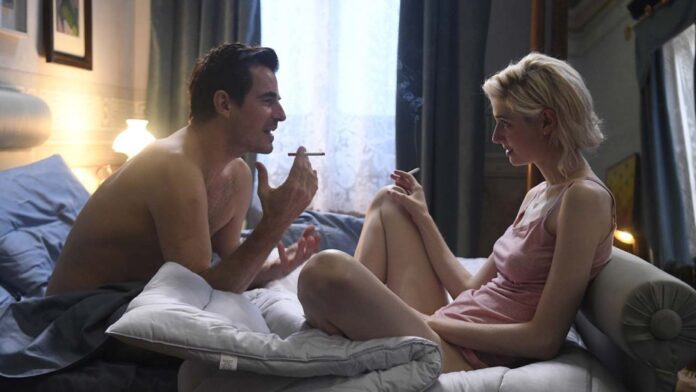 Originally opened in March by Sony Pictures Classics, Giuseppe Capotondi’s astute art world neo-noir The Burnt Orange Heresy is being re-released this week. Why? COVID-19 messed up the first run, the way it is has messed up so many things. Just in terms of the movie, it may be something of a blessing in disguise. At least for me, the film came at a time when interest in a talky, glossed-up caper was low, but now this thorny noir mixing high-class aesthetics with trashy thrills and a gorgeous cast is exactly what the doctor ordered.

Based on the novel by crime novelist Charles Willeford, The Burnt Orange Heresy (that title does get explained) is a twisty, sexy mystery set in the world of pompous art critics and fickle connoisseurs. Claes Bang, who previously starred in one art-world takedown, The Square, plays art critic James Figueras. A self-important windbag struggling to support his drug habit, he gives lectures to clueless Americans who take too seriously the title of his book, “The Power of the Critic”. The film starts during one such lecture, in which James concocts a bullshit story about an artist whose work helped him survive the Holocaust, in order to convince the listeners that a worthless piece is a priceless artifact.

The point? Art is only as valuable as the worth we place upon it. That is a particularly comfortable notion to promote for those who hold all of the power, no? But if you think for a second this is a movie that glorifies in the actual power of the critic, think again. James has his secrets, and those secrets are rooted in past creative failures. Oh, a bitter critic raging against those who cast him out?

Into this room slinks The Burnt Orange Heresey‘s greatest asset, Elizabeth Debicki as flirt art connoisseur Berenice Hollis. A willowy, lithe figure with piercing eyes and the stride of a femme fatale, Berenice is immediately captivated by James more than she is the words coming out of his mouth. Perhaps…too captivated? A brief, passionate fling ensues, in which her directness occasionally clashes with James’ arrogance. But they make quite the pair, and he invites her to the posh villa of an art dealer, Cassidy, played by a beguiling Mick Jagger of all people. Jagger, who presents himself like an overbearing Bond villain; is instantly as magnetic a presence as Debicki. When the two are in the same room, which is painfully rare, they steal all of the breath away from anybody else. Too bad we couldn’t get a movie simply on the debonair, nefarious Cassidy; and the insightful, bluntly honest Berenice.

Before the movie has gone twenty minutes it has already become wildly convoluted. Cassidy has a proposal, which is more like a scheme heist movies are built on. He has legendary artist and infamous recluse Jerome Debney (Donald Sutherland) staying on the property, and Cassidy wants James to secure one of his pieces. It will be priceless since Jerome’s works are so rare, and often consumed by fire. In exchange, James will get a career-making interview that will pull him from the dull lecture circuit he feels is so far beneath him.

Convoluted or not, The Burnt Orange Heresy and its own inflated self-worth has a way of winning you over. Discussions of the value of art, criticism, and creative verity have been recycled frequently, including in the recent Velvet Buzzsaw. But I dug this movie quite a bit more than that inexplicably dull satire, if only because the characters here have so many fun levels to their various deceptions. Paying close attention to every word of Scott Smith’s screenplay yields unexpected rewards; not just for the nuggets of art history sprinkled throughout, but for clues leading to (somewhat) true motivations. A big part of the enjoyment one will get out of it is figuring out who is zoomin’ who, so to speak.

There’s a terrific game of cat and mouse played between James and Berenice. They eye one another with caution, but the tension between them leads to passion. However, there’s no obscuring the central conflict: she sees through his smug exterior like nobody else. While she sees art as part of an essential truth, he values it more for what it doesn’t say. One doesn’t expect these rival philosophies to play out in the silly, over-the-top violent manner it does. A more elegant resolution to The Burnt Orange Heresy might’ve been fitting if it didn’t also confirm one of the film’s essential points; never judge a piece of art by its brushstrokes alone.