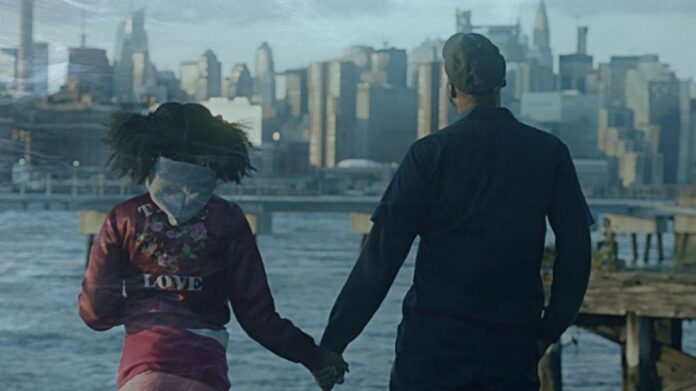 While we are in a world of various pandemics (opioid, COVID, joblessness, racism, etc.), one often does unnoticed from our news reports and timelines: there are more than 70,000 black women and girls missing in America. While there are often media reports that display “missing white women syndrome,” the same can’t be said for young black and brown women who go missing at a higher percentage than their population proportion, and no one seems to be paying attention, or even have any empathy.

That’s what’s so interesting and at the same time, frustrating with Still Here. Set in present-day New York (before coronavirus of course), Still Here focuses on a black family as they are going through the unspeakable. 12-year-old Monique Watson has gone missing and the only people who seem to care about her are her father Michael (Maurice McRae) and her mother Tiffany (Afton Williamson). The cops asked their few questions and moved on. After all, they seemingly have more important things to deal with than just one missing black child. The media, of course, don’t really seem to care much either, except lone reporter Christian (Johnny Whitworth), who seems to want to do the right thing, but also wants to make a name for himself,

While Michael is going door to door asking neighbors and posting flyers, Christian is trying to get to the bottom of the story and try and solve the case instead of the police. After he ventures into the hood “at great risk,” he finds a suspect, only for that supposed suspect to just be another random black person that the police (Johnny Whitworth and Danny Johnson) “push hard” to disastrous results. Faced with a sense of guilt and shame, Christian dedicates himself to doing the story the right way and try to solve the case and help rescue Monique.

Unfortunately, Still Here’s first mistake is with their protagonist. Too often films need to focus on a white male lead at the expense of the black people the film should really be about. Placing Christian as the focus of Still Here pretty much otherizes the black family that should be the main focus. Sure, there are key moments where Afton Williamson and Maurice McRae get a chance to show themselves as a family in pain who just want to get their daughter back, but the story would have been better served by focusing on them and their trauma of not know one day after the next, what the fate of their young child is. Another concern is with the character of NYPD detective Jeremy, who the film tries to make sympathetic. He’s seemingly a terrible member of the NYPD, who at his racist captain’s direction “pushes hard” when interviewing suspects, which pretty much echoes everything Black Lives Matter is against, but then he speaks privately to his partner Danny he wonders if they are doing the right thing, yet goes on and “pushes hard” at the next potential suspect, even treating the Watson family’s teenage son (who’s dealing with anxiety and PTSD in regards to his missing sister) as a “number one male.“ It’s hard to feel bad for a guy “caught up in the system” who does nothing to “push hard” against it. And while Zazie Beetz is a treasure in everything she appears in, she pretty much serves as stunt casting in Still Here as she’s only in the movie for one scene to help advance the plot towards its conclusion.

That said, Still Here does showcase some great acting, especially for the Watson family, and feels all too real when dealing with the negligence all the institutions involved (media and police) have towards actually helping young Monique. The reporters just want to get a good story and even Christian’s crusade starts as a bum assignment that he wants to flex into getting more exposure. The police just want the case solved because they don’t want the media upstaging them and carry out pretty much our worst impulses about cops, especially in today’s climate. This further hones the need to explore this current pandemic of missing black girls as more attention should be paid to them, and the people that prey on them.