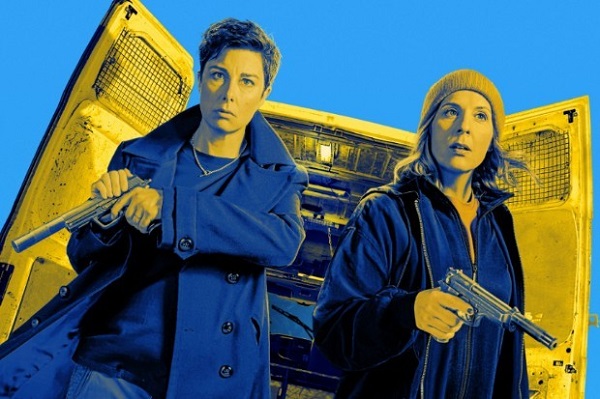 If you have ever been scrolling away your nights and come across The Great British Bake Off (Or BBO) on Netflix, congratulations: you found one of the few the one reality shows that isn’t almost complete trash. BBO is sort of a completion, but in the nicest possible way as contestants compete in a cooking completion without stabbing each other in the backs. The show is charming as hell, and in most part due to comedy duo Sue Perkins and Mel Giedroyc, who work together as “Mel and Sue.” Mel and Sue have been an active comedy team in the UK since the 1990s and have been in many British comedy shows and hosted their own daytime shows, and across the pond are a household name. Now it’s time we in the States, get to see them in action in NBC’s streaming service Peacock’s new show Hitmen.

Hitmen has a fairly simple premise, it’s about a pair of hitmen (or hitwomen in this case), who carry out various assassinations for a mob boss. The only issue is, they kinda suck at it. Each episode consists of Fran (Sue Perkins) and Jamie (Mel Giedroyc) as they are assigned to murder someone on the orders of their boss “Mr. K.” And somehow, they find a way to mess things up and spend most of the episode bickering with each other, while trying to pick up the pieces to kill their assignment (whether they lose the target, get locked out of their car, have a change of heart, or many other shenanigans), and eventually finish the job in a hilarious fashion.

Because the actual assassinations happen by the end of each episode, the real meat of each episode lies in the chemistry between our two leads. After all, Mel and Sue have been a comedic pair for decades at this point, so, Hitmen doesn’t suffer a lack of chemistry between Fran and Jamie. However, after the first two episodes, the formula of the show is clear, which takes some of the mystery away. However, there are a few episodes that make a nice detour to keep the show interesting. The one that really stands out in the 6-part series is the penultimate episode “Rivals,” when the two are forced to team up with their de facto rivals for their contract. This allows them to pair off with equally bumbling contract killers, including one that Sue has a crush on. Slowly but surely things get weird, but twist and turns in even more bizarre ways that the show has set up. Besides that episode, Hitmen just runs through the formula it sets up from the first episode.

Hitmen also tries to walk a tightrope of being a quirky sitcom-style comedy about the chattiness of Sue and Mel as contract killers and the weird antics they get into while waiting for Mr. K to give them the go-ahead to kill their charge after catching them, and also being a show about assassins who kill people. There are times where it feels like it’s trying to do a Pulp Fiction (maintaining great dialogue and terrible violence), but it doesn’t really work as well. Some of the killings are rough but also done for comical whims, and it needs to pick and choose which style Hitmen wanted to have. But once again, Sue and Mel are great and seem to effortlessly have a good time bringing these quirky characters to life.