They say love conquers all, but does that apply at any age? The new supernatural romance Endless tests the boundaries of teenage love. Riley (Alexandra Shipp) was on top of the world. She is one of the top students in her class, has a great internship, and heading to Georgetown for college. On top of all that, she is madly in love with her boyfriend Chris (Nicholas Hamilton). On paper the two of them didn’t make sense. Chris was towards the bottom of the class, drives a motorcycle, doesn’t come from money. Her parents didn’t approve of him or their relationship, but that didn’t matter to Riley. Opposites attract and they were head over heels for each other. At the drop of a hat everything can change. One fateful night Riley is driving a drunk Chris home from a party when they get into an accident. 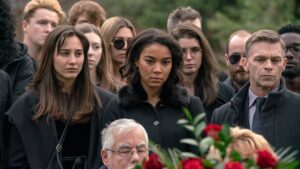 Riley wakes up in the hospital with some bumps and bruises, but unfortunately the accident claimed Chris’s life. Riley begins to spiral out of control without Chris and blaming herself for his death. Riley’s best friend Jules (Zoë Belkin) tries to be there for Riley and Nate (Eddie Ramos), Chris’s best friend, but their guilt is beginning to consume them. Chris’s mom Leigh (Famke Janssen) also blames Riley for his death, only adding to her overwhelming guilt. However, Chris isn’t really gone – he is stuck walking around with no one being able to see or hear him. 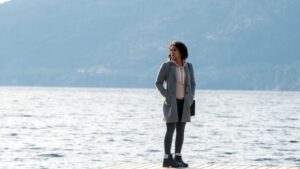 Chris luckily stumbles onto Jordan (DeRon Horton), another deceased person who wasn’t able to move on, or ‘skip’ as Jordan says. Jordan takes Chris under his wing and shows him the ropes. Chris is only thinking about Riley and visits her often, trying to reach her and comfort her. Then one moment, he gets through. Riley has always planned on following in her parent’s footsteps and becoming a lawyer, but Chris questions this. He sees the talent she has with her art and doesn’t want her to give up on that dream. Riley always loved that Chris saw the real her. Their connection over her art is what bridges life and death.

Director Scott Speer and writers Andre Case and O’Neil Sharma do a great job of capturing young love. The chemistry between Shipp and Hamilton seems genuine. They have the audience believing in their connection and feeling for the two of them. Strong support from their costars only helps to bolster Shipp and Hamilton’s performances. The film explores a wide range of emotions and solid acting is key. Endless is framed in a way that we not only experience what Riley is going through, but Chris as well. Spier quickly builds a world for Chris to explore, learning new rules and possibilities. While done hastily, it still works and is not over the top. 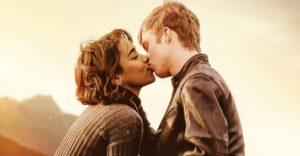 Speer employs various techniques to keep the film seemingly fresh and interesting. From a reliance on music, chosen perfectly to match the scene, to interesting camera angles – Speer makes great choices throughout. He is able to find that perfect balance of cinematography, just enough to set scenes apart, but not too much to overpower. There are some shots that will be fresh in the viewer’s minds, long after the credits roll. Clearly Endless doesn’t reinvent the pottery wheel, but there is nothing wrong with another take of a classic tale. Endless pulls at the heart strings, and while it isn’t perfect, is overall a successful story of love and loss.