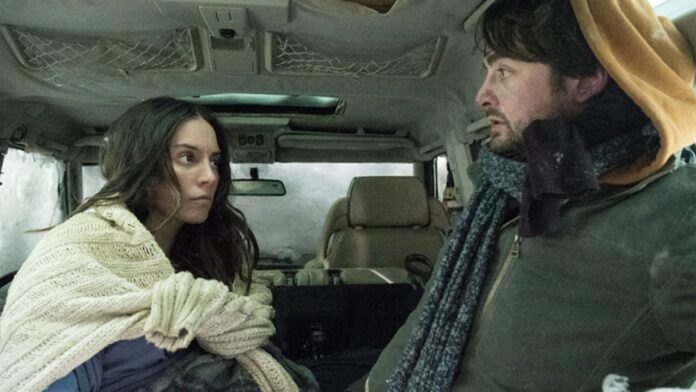 Of the many thriller sub-genres, the contained survival thriller, or the “small box thriller” as I like to call them, is a particular favorite. They come in many different styles and unusually-odd predicaments: enclosed in a phone booth, buried in a casket, locked in a panic room, stuck on a snowy ski lift, but the exterior physical situation is less important than the internal monologue of the one trapped. In Brendan Walsh’s icy feature debut, Centigrade, Genesis Rodriguez and real-life partner Vincent Piazza find themselves buried under the Norway snow. And while their interactions are tense and authentic, their characters aren’t fully-formed enough to cover for the movie’s bland direction and lack of momentum.

Centigrade is a slow-freezing thriller, a two-hander arranged like a particularly grim stageplay. The underrated Rodriguez (More of her, please. ) plays Naomi,with Piazza as Matt, a couple who awaken in their car on the side of the road in Norway, where they had been on a tour for her latest book. A storm for the ages had forced them to pull off the road, and having fallen asleep, they now find themselves completely buried under the snow with no chance of escape. They have enough food to last a few days, and only a couple of bottles of water. With the nearest town more than 50 miles away, they only have themselves to rely on.

Oh, did I mention that Naomi is due to give birth in a few days?

Walsh cleverly keeps that fact buried (no pun intended) for the first few minutes, and when it becomes known it smacks you across the face. This shit just got real.

Walsh and co-writer Daley Nixon focus on the tensions that arise, not just from being encased in what amounts to an icebox, but the stress of impending parenthood. The survival urge is taken to another level when another life is at stake, and natural conflicts arise as a result. The increasingly contentious conversations between Naomi and Matt are believable and build by degrees. It starts with an argument about being careful with the water, then reaches a fever pitch as Naomi begins talking about the “secrets” they all keep hidden.

At one point, Naomi decides it’s a good idea to break a window and escape, until Matt warns her that “once a window is broken, it’s broke” (paraphrasing there), and that becomes a theme for their relationsip. Despite the survival instinct that kicks in for themselves and their unborn child, it’s clear that old tensions have been amplified, brought to the surface the life-or-death struggle. Centigrade explores whether this adversity can break a relationship or solidify it. In the case of Naomi and Matt, conversations they should have had long ago are forced out into the open. These discussions are what keep the film interesting for a while, but there simply aren’t enough of them and they don’t reach deep enough for us to connect with the characters beyond their struggle.

Rodriguez and Piazza are excellent at capturing Naomi and Matt’s physical and emotional deterioration, which seems to wither away faster with each exhausting argument. Note the look of crazed desperation on Naomi’s face with that first kick inside her stomach, realizing they have more than themselves to be worried about. Or the resignation on Matt’s when the snow freezes over into ice, making their car more like a coffin than a mode of transport. Both actors go through a physical transformation along the way that is impressively creepy to watch, especially in the case of Rodriguez who must portray a full-figured pregnant woman reduced to a frail shadow of her old self.

There just isn’t much else for Centigrade to fall back on, and Walsh’s bleak, pale color palette and lack of environmental variety create a deadening tone that’s tough to endure. There needed to be something to break up the visual monotony, perhaps flashbacks to key moments in the couple’s relationship. On the plus side, Walsh does a lot with the little bit that he has. During production, a walk-in freezer was used as the vehicle interior and it more than accomplishes the task. Those with claustrophobia, or fears of an ice-cold demise, might want to brace themselves.

Centigrade eventually becomes a “what else awful can happen” experience, when it should be about how much more the characters can endure. While the cast do their best in capturing the fear, anxiety, and loneliness of being encased by a wall of snow, there’s not enough here to keep our attentions from thawing out.