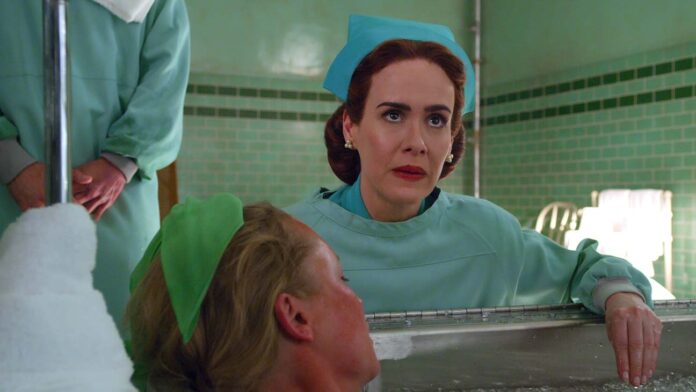 On the surface, Ryan Murphy’s latest Netflix series Ratched bears striking resemblance to his American Horror Story. An evil nurse plies her trade on unwilling patients in a mental ward. But there’s a lot more going on, as the show stars Sarah Paulson as Nurse Ratched, the infamous heel of Oscar-winning film One Flew Over the Cuckoo’s Nest.

Ratched is actually a prequel to the classic 1975 movie which starred Jack Nicholson in one of his most iconic performances. Paulson plays Nurse Mildred Ratched as she evolves into one of the vilest monsters in movie history, played by Louis Fletcher in an Oscar-winning performance.

Murphy is already TV’s busiest man, but he has been in overdrive since striking a deal with Netflix. This is his third series for the streamer, following The Politician and Hollywood. Based on the little bit we get in this trailer, Murphy is pulling from all of his past shows, combining horror elements, dark humor, and period-specific production values.

SYNOPSIS: From Ryan Murphy and Ian Brennan, RATCHED is a suspenseful drama series that tells the origin story of asylum nurse Mildred Ratched. In 1947, Mildred arrives in Northern California to seek employment at a leading psychiatric hospital where new and unsettling experiments have begun on the human mind. On a clandestine mission, Mildred presents herself as the perfect image of what a dedicated nurse should be, but the wheels are always turning and as she begins to infiltrate the mental health care system and those within it, Mildred’s stylish exterior belies a growing darkness that has long been smoldering within, revealing that true monsters are made, not born.