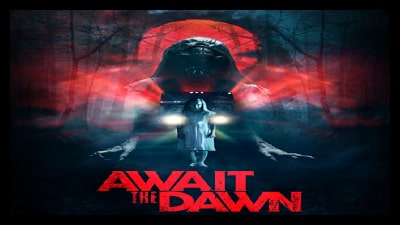 I’ve always said that the scariest sights are ordinary things in places they don’t belong. A clown in an old slaughterhouse, an old record playing in a room with no people, and little kids basically anywhere that you wouldn’t normally see one, bonus terror points for putting them in overly-adorable clothing. Pablo Macho Maysonet IV (AMAZING name btw), knows this and that’s why his indie horror film Await the Dawn has been generating so much buzz. The trailer dropped today and I’m both fully onboard and completely terrified. Ever since Pet Semetary I’ve had a tough time making it through a demon kid movie. If I’m being completely free and open with you good folks, I’d tell you that this is a trailer I wouldn’t watch by myself in a dark room. It seems equal parts retro and modern, not an easy task, but most importantly it seems to exude the simplicity required for a REALLY good horror film. Even this synopsis speaks to something that fans of the genre would really want to see:

A family in turmoil, traveling cross country in their RV to seek professional treatment for Jamie, the youngest child’s drug addiction. Their plans are quickly derailed as Howard, a desperate man with a terrible secret, ambushes them at gunpoint. With little to no reason given, he instructs them to transport him as far south as possible. However, they are quickly cut off by a mysterious pre-teen girl named Maggie. She may seem like a sweet all-American girl, but deep inside, she harbors an immense otherworldly evil. The troubled family must now put their trust in their captor, as they try to survive the night…and Await the Dawn.

Await the Dawn stars Dee Wallace, Bruce Davison, and Vernon Wells and is reported to be released later this year.