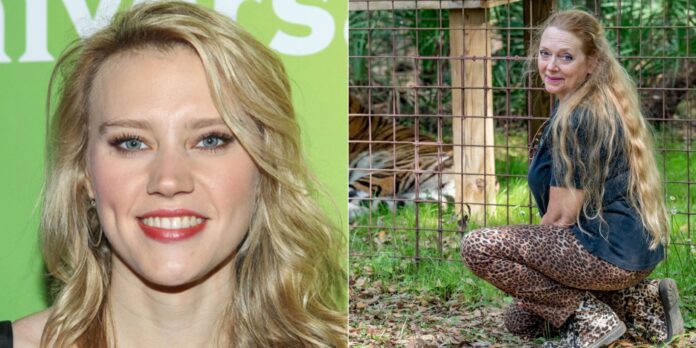 Wow…that’s how long this lockdown has been. Remember when it first started and we were all drawn into the world of Joe Exotic, Carol Baskin, and for-profit tiger zoos? Seems like ages ago, but even then we knew this story was ripe for adaptations. In the most amazing news of all time it was announced shortly after that Nic Cage would be taking on the role of Joe Exotic in a movie. Now we get news that seems almost just as perfect, with Kate McKinnon taking on the role of Carol Baskin in Joe Exotic, a comedy series for NBC Universal and Peacock. Everyone is familiar with McKinnon at this point, she’s a legit top-level comedic talent, but if you’ve watched her career progress through her time on SNL you know the perfection with which she plays slightly less then sane characters. Let’s be honest, that line pretty much describes Carol Baskin to a T. The twist here is that the show will not be based on the Netflix documentary that launched these folks to super-stardom, but off the telling of their story from Wondrey’s podcast ‘Over My Dead Body’. I couldn’t make it through the whole Netflix series, my anxiety just couldn’t take it, but knowing now that Wondrey did a podcast I’m fully in, they do amazing things with their subject matter. I’m definitely one of those true-crime Junkies. I can say that even though I’m not familiar with this version of the source material yet, I am FULLY on-board seeing what McKinnon does with this role.