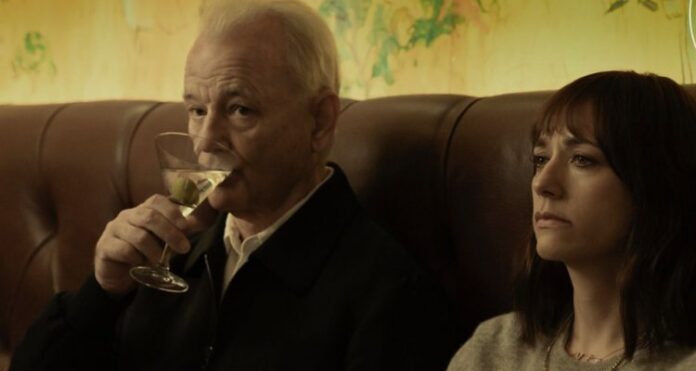 It’s usually an excruciating three-year-wait for a new Sofia Coppola film, and right on time following 2017’s underrated The Beguiled, the director is back with her new project for Apple and A24.  On the Rocks stars Bill Murray and Rashida Jones, and returns Coppola back to the small-scale relationship stories of Lost in Translation and Somewhere.

The first images from On the Rocks have arrived, featuring Murray, Jones, and co-star Marlon Wayans. Murray plays Jones’ larger-than-life playboy father, who she struggles to connect with during an adventure in New York.

Coppola and Murray are, of course, familiar with one another from Lost in Translation, a film that earned the actor his only Oscar nomination for Best Actor. Speaking with EW, Coppola talked about reuniting with Murray and her reasons for wanting to do this movie…

“I wanted to do something that was a little bit lighter and more playful with a lot of heart and sincerity.”

“I never thought I could do something with Bill again, because people have such a fondness of him and ‘Lost in Translation. I could never recreate something like that, so I never wanted to touch it. But, all this time has passed, and I loved working with him and I love seeing him in film. We haven’t really seen him as this debonair, playboy father at this stage [of life], so I just had to get over it because now we’re in a different phase [of life].”

On the Rocks hits theaters and Apple TV+ this October.