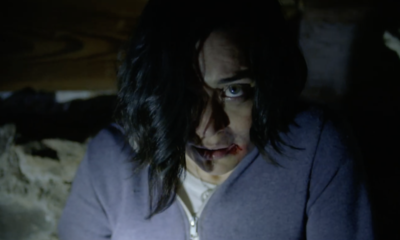 Ozark and The Outsider‘s Marc Menchaca looks creepy as Hell in the new trailer for Alone, playing a serial killer on the hunt for Bloodline actress Jules Wilcox. The film is by director John Hyams, and penned by Mattias Olsson, who has a track record with exactly this kind of movie, except in another country.

In Alone, Wilcox plays a woman wrecked by grief over the loss of her husband, so she flees the city to get some distance. However, she’s stalked and kidnapped by a mysterious man, played by Menchaca, and must navigate the harsh forests of the Pacific Northwest while fleeing her captor.

So this looks like an English-language version of Olsson’s 2011 Swedish film, Gone, which had virtually the same plot.

SYNOPSIS: Set in the Pacific Northwest wilderness, the film follows recently widowed Jessica who, fleeing the city in a desperate attempt to cope, is kidnapped and locked away in a mysterious man’s cabin. Her escape from the clutches of this murderous captor lands her in the heart of the untamed wilderness, with only her wits to rely on for survival as her pursuer closes in.