Fans of Netflix heartthrob Noah Centineo rejoice. Your boy is headed to the big leagues with his first big superhero film, starring alongside Dwayne Johnson in Shazam spinoff Black Adam.

According to THR, Centineo will play Atom Smasher in Black Adam, the spinoff movie that Dwayne Johnson has been talking up even before there was a Shazam. Atom Smasher, aka Albert Rothstein, is the godson of the Golden Age hero The Atom, and has the power to control his molecular structure, allowing for super-strength, growth, and a host of other abilities. He was previously played by Adam “Edge” Copeland in the second season of The Flash. 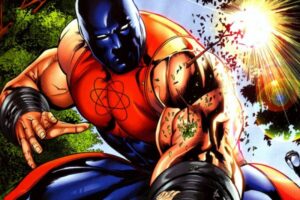 The character is most closely associated with the Justice Society of America, who are expected to be part of the movie. It’s looking increasingly likely that Black Adam will take place across multiple time periods, in the past and in the present.

Centineo won a legion of fans for his role in To All the Boys I’ve Loved Before and its sequel, plus Sierra Burgess is a Loser, and The Perfect Date. He then landed the role of He-Man in the delayed/shelved Masters of the Universe movie. A supporting part in the recent Charlie’s Angels film is his biggest brush with a project of this scope.