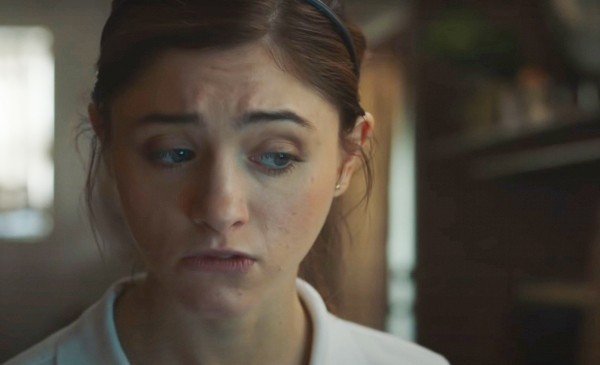 An R-rated sex comedy from Karen Maine, writer of the progressive, challenging, and funny Obvious Child? One might think the provocatively-titled Yes, God, Yes would offer more than an Afterschool Special’s take on a young Catholic girl’s awkward exploration of her own sexuality. While the film maintains a perky, upbeat tone throughout and makes plenty of masturbatory allusions, there’s very little to get hot and bothered over.

Maine’s directorial debut stars Stranger Things‘ Natalia Dyer as Midwestern Catholic schoolgirl Alice. If there’s any question about the time period, the screeching sounds of the America Online login will snap you into reality. It was a time when we were just learning what “cyber” meant in the AOL chat rooms. Alice, a typically lustful teen who is still reeling from Father Murphy’s (Timothy Simons) dorky assertion that men are like microwaves and women are like conventional ovens when it comes to sex, is an easy target for an online horndog. She doesn’t understand why she revs up faster than other girls. There isn’t any help forthcoming from her school’s sex education classes, and one can only watch the sex scene from Titanic so many times. So Alice does the only thing she can think to do, which is attend a Bible school retreat where she hopes to renew her faith, and maybe, finally, learn what the heck it means to “toss someone’s salad”, an act she’s been accused of committing by pretty much the entire school.

You won’t be shocked to learn that the Catholic Church can be hypocritical when it comes to matters of sex. If that’s a revelation to you, then maybe Yes, God, Yes is a movie that will strike home. But for others, the messages within are pretty soft, with Maine offering few insights for someone who has such a personal connection. The truest moment in the movie comes during a lesbian bar scene, in which Alice, after downing a wine cooler like a pro, has an eye-opening chat with a former Catholic about how ridiculous its teachings can be. This feels like Maine really getting something off her chest that she has been holding in. Too bad the rest of the movie isn’t nearly as confrontational of the subject matter. Not that we need blunt depictions of sex or anything, but there’s no reason for this movie to be rated-R and kept from the demographic who might get the most out of it. There’s hardly anything racy in it at all, other than Alice’s clumsy attempts to pleasure herself.

Maine acknowledges the time period in ways that help the movie feel authentic, however. Set in 1999, VHS tapes are still in wide use, Christina Aguilera’s “Genie in a Bottle” plays in the background like a Sunday hymnal, and of course, AOL is still a thing and with it all of the gross “age/gender/location” requests that come with chatting. The use of setting is well-done without becoming a distraction, with the use of music particularly inspired.

What’s really at stake here for Alice, though? That’s something Yes, God, Yes never clearly answers. Is it her eternal soul? Eh, probably not. In fact, Maine goes out of her way repeatedly to confirm that Alice is completely normal, and that the people around her are the weirdos. While that’s a sentiment I agree wholeheartedly with, it doesn’t make for a compelling film that Alice faces no real challenges and has no crisis that forces even a little bit of reflection.