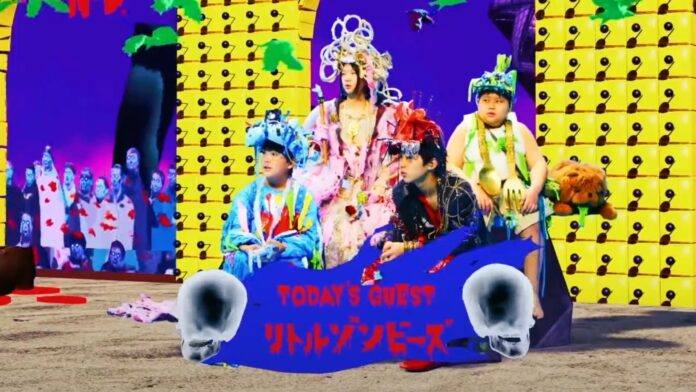 There are very few movies I want to watch on LSD. We Are Little Zombies is one of the few. This brightly colored and hilariously dark and weird coming of age film premiered at the Sundance Film Festival in 2018. The brainchild of first-time Japanese director Makoto Nagahisa, We Are Little Zombies follows the turbulent and unfeeling lives of four thirteen-year-old orphans, all emotionally cut off after the deaths of their parents.

After meeting at a crematorium by chance, Hikari, Ikuko, Ishi, and Takemura, find that they all have a lot in common besides being recently orphaned children. They all are lost in their own worlds, regular society doesn’t understand them, and they all can’t seem to feel emotions anymore- they are like “little zombies.” They decide to form a band and through catchy lyrics and video games references, they take over the world before their grief catches up with them

Makoto Nagahisa’s creation is a vibrant and very stylized avant-garde piece. Think of it as if the children from a Wes Anderson film lived in Scott Pilgrim’s universe but it was directed by Bong Joon Ho on 50 tabs of acid. Believe it or not, that’s a compliment. Nagahisa’s passion and enthusiasm oozes out of every pore this movie has. However, there’s so much going on visually and sonically that the story of these grieving kids gets lost in the film’s aesthetics. For example, the 8-bit video game aesthetic that colors Hikari’s origin story gets old very fast. The ending doesn’t hit you the way it should because of its oversaturation and Nagahisa’s creative use of animation falls into the background.

Pulling from Kafka, 60’s psychedelic culture, anime, and of course video games, there’s always something to look at on-screen. We Are Little Zombies‘ crowning achievement might be its musical moments. Composed by the director, the musical sequences allow real emotion to shine through macabre satire that is the rest of the film. From the band’s breakout hit “We Are Little Zombies” to a cover of The actual Zombies “This Will Be Our Year,” the pop-punk fusion of the music adds a bright tone to an otherwise dark one.

Most films I wouldn’t recommend reading about or seeing the trailer in order to get the film’s full effect, but a little context might be good in this case. Once you understand that this is about the group’s journey to feel emotion again, the aesthetics land more. This doesn’t really effect the pacing, which lags during the third act, but it is helpful to know that it is going towards some emotional payoff. Overall, We Are Little Zombies is the psychedelic fever dream of the summer that just has a little growing up to do

We Are Little Zombies is available in virtual and live cinemas July 10th. Click here to see where it’s playing near you. Watch the trailer below.